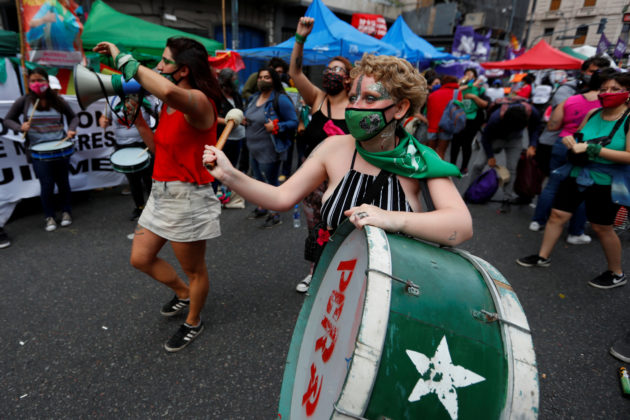 BUENOS AIRES (Reuters) -Argentine lawmakers began debating a bill to legalize abortion on Thursday as protesters rallied outside Congress waving trademark green scarves in support of the legislation that could set the tone for a wider shift in Latin America.

The draft law, which would provide for the legal termination of pregnancy up until the 14th week, is backed by center-left President Alberto Fernandez. It is expected to be narrowly approved by congressional deputies before moving up to the Senate, where an even tighter vote is anticipated.

The South American country is the birthplace of Pope Francis, and Thursday’s debate comes as a number of countries in the predominantly Roman Catholic region are seeing drives to give women greater reproductive rights.

A spokesman for the ruling party said a debate of almost 30 hours was expected in the lower house, meaning that the bill – which could undergo modifications to achieve broad consensus – would be likely to face a vote on Friday morning.

“”We are convinced that this offers a concrete answer to an urgent and structural public health problem,” said Elizabeth Gómez Alcorta, the government’s Women, Gender and Diversity minister, as she opened the session in the Chamber of Deputies.

“The time has come to stop looking the other way.”

Protesters supporting the bill began gathering outside Congress with their green scarves on Thursday, planning an overnight vigil to await news of what they hope will be an approval this time round after a similar vote to legalize abortion was narrowly defeated in 2018.

Opposition groups, who wear light blue scarves, have also pledged to take to the streets to demonstrate against the bill.

The initiative includes a parallel bill which will face a separate vote to assist women who want to continue with their pregnancy and face severe economic or social difficulties.

Argentine law currently only allows the voluntary interruption of pregnancy when there is a serious risk to the mother or in the event of rape, although activists say many women often do not receive adequate care.

The country has seen a gradual rise in agnosticism in recent years. While the current Peronist government is strongly behind the bill, that was not the case in 2018 during the conservative administration of Mauricio Macri.

“We are not in favor of abortion, we do not recommend or suggest it, we are against clandestine abortion that kills thousands of women,” Argentine actress and campaigner Carola Reyna posted on Twitter.

“We believe that it is a practice that should be regulated by the State, guaranteeing women’s health.”