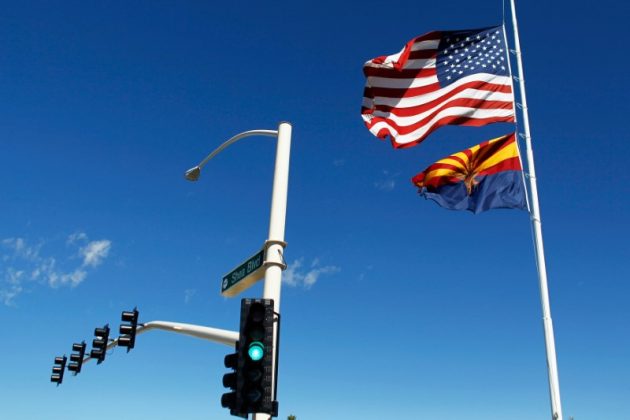 The U.S. and Arizona flags flutter in the wind in Fountain Hills, Arizona, U.S. on September 30, 2016. REUTERS/Ricardo Arduengo

PHOENIX (Reuters) – Arizona’s governor signed a budget bill on Thursday that will boost teachers’ wages by 20 percent over the next three years, after dozens of the state’s school districts canceled classes as part of a strike to demand pay raises.

Tens of thousands of Arizona teachers, whose pay is more than $10,000 below the national average of $59,000 per year, have held a week-long walkout that has been the largest teachers’ strike in U.S. history and has kept most of state’s 1.1 million public school students out of class.

Lawmakers in the Republican-controlled state legislature worked through the night to pass the $10.4 billion budget. Outside, hundreds of red-clad teachers held a overnight rally, local media reported.

The bill allocates more than $600 million for salary increases, meaning teachers would get raises of nearly 10 percent this year and about five percent in each of the following two years.

“Arizona teachers have earned a raise, and this plan delivers,” Ducey said in a statement issued as he signed the bill. “This plan not only provides our teachers with a 20 percent increase in pay by school year 2020, it also provides millions in flexible dollars to improve our public education system,” added Ducey, a Republican.

The budget also includes about $371 million over five years to restore cuts imposed on education spending during the U.S. recession that ended in 2009, starting with $100 million this fiscal year, according to state officials. This figure is far less than the $1.1 billion teachers say has been cut from their budgets since the recession.

Although the budget bill was passed, districts in Phoenix, Tucson and Tempe, along with more than three dozen districts throughout the state, had already notified parents and local media that classes were canceled on Thursday, according to the Arizona Republic newspaper.

The protests are part of a national teacher action that began in West Virginia and spread to other Republican-controlled states, including Kentucky and Oklahoma.

Walkout organizers in Arizona had previously said they could not support the budget, but recognized it was likely the best offer they would get.