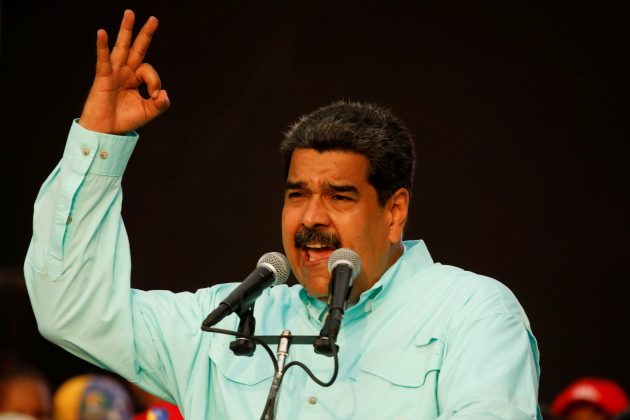 By Vivian Sequera and Andrew Cawthorne

CARACAS (Reuters) – President Nicolas Maduro scoffed at international criticism of Venezuela’s upcoming May 20 vote in which he is seeking re-election and offered a prize for those who vote with a state-issued card.

Venezuela’s mainstream opposition is boycotting the election on the grounds it is rigged in favor of the 55-year-old socialist incumbent. The United States, European Union and various Latin American neighbors have also slammed it as unfair.

Maduro, who is casting his re-election campaign as a battle against imperialist powers bent on seizing Venezuela’s oil wealth, has only one serious rival: Henri Falcon, 56, a former state governor. Falcon has broken with the opposition coalition’s boycott of the vote, believing anger at a economic crisis will win him votes.

OPEC member Venezuela is in a fifth year of punishing recession, inflation is the highest in the world, oil production is at a three-decade low, shortages of food and medicines are widespread, and millions are skipping meals.

But the opposition abstention campaign, presence of Maduro loyalists in key institutions including the election board, and vote-winning power of state welfare programs like housing and food giveaways makes a Falcon victory look a tall order.

In his speech, Maduro told supporters that all those who vote showing a government-issued “Fatherland Card,” which is needed to access certain welfare programs, probably would receive “a really good prize.”

He did not give details but critics say that, and other pre-election cash and other bonuses via the card, is akin to vote bribery. Voting in Venezuela is secret but state workers say they are constantly pressured to support the government.

Falcon, a former soldier, has been largely shunned by Venezuela’s best-known opposition leaders but this week received the support of at least one high-profile leader, Enrique Marquez, who is vice president of A New Time party.

He also has been wooing twice-presidential candidate Henrique Capriles to join his campaign but without success so far. Capriles, and another popular opposition leader, Leopoldo Lopez, are both barred from standing in the election.

Maduro says Venezuela’s election system is the cleanest in the world but even the official operator of the voting platform, UK-based Smartmatic, denounced fraud in an election last August. Little is known about the Argentine company that has replaced it for this month’s election.

If Maduro does win re-election, attention will turn immediately to whether he plans to use the political breathing space to deepen an internal purge of rivals, and if the United States will carry out a threat to impose oil sanctions.

Pro-boycott opposition activists have been stepping up their campaign in recent days with scattered protests around the country. Numbers, however, have been thin – a far cry from the mass anti-Maduro protests of 2017.

“Those who participate with Maduro in the May 20 farce, including Henri Falcon and (evangelical pastor) Javier Bertucci, have split with Venezuelan patriots and democrats,” an opposition grouping called the Wide Front said in a statement.

“By recognizing false results, they will become a collaborationist opposition recognized by the regime so it can outlaw and persecute democratic society.”