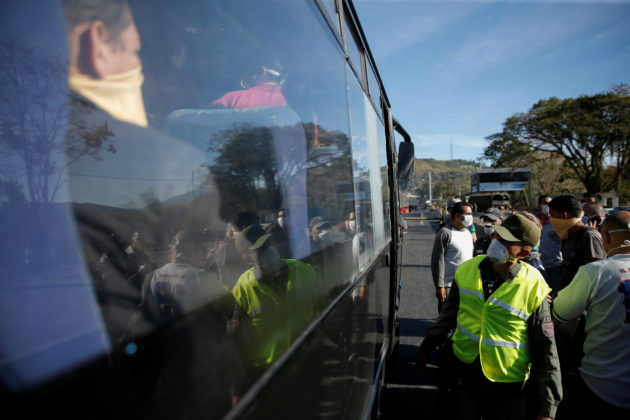 A member of the Bolivarian National Guard checks if people onboard a bus are wearing their protective masks before allowing them to pass through a checkpoint into Caracas, in response to the spread of coronavirus disease (COVID-19), in Venezuela March 16, 2020. REUTERS/Angus Berwick

CARACAS (Reuters) – On March 13, Melquiades Avila, an indigenous leader and journalist in the remote Venezuelan state of Delta Amacuro, asked on his popular Facebook account: “Will our hospital be ready for coronavirus?”

Earlier that week, as Venezuela confirmed its first infections by the novel coronavirus, President Nicolas Maduro’s health ministry on its website had listed Delta Amacuro’s Luis Razetti Hospital as one of 46 medical centers “prepared” to receive COVID-19 patients.

Avila enumerated various reasons, all confirmed by Reuters in interviews with physicians at the hospital, why the claim was false: The facility has no blood pressure monitors, syringes, or reagents to diagnose coronavirus infections.

“What a joke,” Avila wrote.

A day later, Lizeta Hernandez, governor of Delta Amacuro and a member of the ruling Socialist party, called on local radio for Avila’s arrest, accusing him of “inciting hatred” and denouncing him as “criminal.” She ordered the state Army deployment to detain Avila “so that I can give him a masterclass in the meaning of public duty.”

In a voice message to Reuters, the governor this week said she only wanted to “orient” Avila and ensure he was being “serious and responsible” as a journalist. She declined to answer questions about the hospital, its readiness or previous clashes with Avila, who for years has criticized health care in the state.

Raquel Ruiz, the hospital director, denied the facility is unprepared. State authorities, she added, are readying a nearby building to treat coronavirus patients.

The threat against Avila, who is now in hiding but spoke with Reuters by telephone, is one of at least seven recent episodes in which Venezuelan authorities have sought to arrest critics of the government’s preparedness for the coronavirus, according to interviews with three accused individuals and lawyers of four others.

In addition to Avila, police have arrested an opposition lawmaker who tweeted – correctly, according to health workers from the facility – that another hospital on the “prepared” list has no running water. Police also arrested a retired medical technician who in a video said a hospital in Monagas state was unprepared.

Officials from Venezuela’s health, justice and information ministries didn’t respond to requests for comment about the detentions, conditions at the hospitals or police involvement in the coronavirus response.

Even in normal circumstances, dissent can subject citizens to arrest, prison sentences or worse in Venezuela, where aggressive security policies have prompted Western democracies to sanction the government for human rights abuses. Now, government opponents say the coronavirus offers a new opportunity for Maduro to crack down.

In China, where the current outbreak began, government efforts to quash early warnings about the virus may have helped it spread, public health experts have said. China denies any such cover-ups happened.

Maduro’s critics fear the same may happen in Venezuela, where poverty, hunger and a shortage of basic medical supplies complicated health care even before the pandemic. “The government is trying to hide the truth,” says Humberto Prado, who heads a human rights commission for opposition legislators. “If you talk, they’ll arrest and silence you.”

As of late Tuesday, Venezuela has confirmed 91 COVID-19 cases and no deaths.

More than 20 doctors and public health specialists told Reuters they fear the toll could mount quickly despite a show of force that the government says should contain the outbreak. Some of its measures are not unlike the enforced lockdowns imposed by some U.S. states and Western European nations.

But the forces carrying out the tasks in Venezuela have long been associated with corruption and extralegal violence. The National Police’s feared Special Action Force, accused by citizens and government critics of extrajudicial killings and torture, patrols streets.

Intelligence agents now guard sites ranging from supermarkets to the Caracas medical institute tasked with coronavirus testing. At some roadblocks, police and soldiers have shaken down medical workers before letting them get to or from work, according to 12 doctors and nurses interviewed by Reuters.

One physician said she paid the equivalent of a week’s salary at a checkpoint in the central city of Maracay. “The officers weren’t going to let me pass,” she said.

Some police, acting on tips from neighborhood informants, are accompanying government medics to poor neighborhoods and forcing individuals with suspected coughs or other illnesses to get examinations, people familiar with the operations said. The administration this week said security forces had visited over 18,000 homes.

Meanwhile, the government is keeping private physicians from conducting diagnoses, senior doctors told Reuters, centralizing all testing at the National Hygiene Institute, a Caracas facility that passes results directly to the health ministry.

Earlier this month, the ministry stopped coronavirus testing at Caracas’ private El Avila Clinic, two medical workers familiar with the order said. On March 13, one of these people said, government workers went to the clinic and confiscated testing materials.

Vicente Marzullo, the clinic’s director, didn’t respond to efforts by Reuters to discuss the government’s measures there.

Avila, the 54-year-old journalist in Delta Amacuro, has angered government officials before. A member of the native Warao tribe, Avila has chronicled growing health challenges for indigenous peoples during Venezuela’s economic collapse.

In 2018, he broadcast on local radio a Warao woman saying relatives were dying because of a lack of medicines. Hernandez, the governor, stormed into his office afterward and accused him of spreading lies, Avila said.

Four physicians at the hospital on Maduro’s coronavirus list told Reuters that Avila’s warnings are accurate. The doctors, who asked not to be identified, said the hospital has none of the materials Avila mentioned and that, crucially, it has no ventilators, which have been vital in other countries to help COVID-19 patients breathe.

Health-care workers in nine additional states told Reuters that other hospitals on the list are also deficient.

The Leopoldo Manrique Terrero Hospital, in the Coche district of Caracas, isn’t even open to patients. It hasn’t functioned as a clinical facility for at least three years, two maintenance workers there said. Reuters was unable to identify a director for the hospital or a working telephone number for administrative offices.

In northeastern Monagas state, medical personnel have been so concerned about a lack of preparedness for COVID-19 that they filmed a protest outside the Manuel Nunez Tovar Hospital, another facility on the list.

Darwin Moreno, the hospital’s director, in a brief telephone conversation this week said he could discuss the incident later in the day. He didn’t return follow-up phone calls or messages.

In the video, filmed March 13 and seen by Reuters, Julio Molinos, a retired technician and medical union leader, urged the health ministry to be transparent. The video, shared widely through chat groups, reached authorities.

On March 15, officers from the Special Action Force, or FAES, arrested Molinos, according to two lawyers defending him. FAES administrators didn’t respond to a Reuters request for comment on the arrest.

Last week, a judge placed Molinos, 72, under house arrest on charges of conspiracy and inciting hatred and panic. Jose Sosa, one of his lawyers, denied the charges and called Molinos a “political prisoner.”

In the southeastern state of Bolivar, Tony Geara, an opposition lawmaker, in a March 14 Twitter thread wrote that “there isn’t even water” at the local Ruiz y Paez Hospital. Three workers there told Reuters the facility hasn’t had running water for the past five years and relies on trucks to deliver it.

Reuters was unable to reach hospital directors for comment.

Hours after Geara’s tweets, agents from the SEBIN intelligence agency stopped the lawmaker at a roadblock, according to a report by the agency reviewed by Reuters. He was arrested and remains in police custody.

At a court hearing last week, prosecutors charged Geara, 58, with possession of explosives and trafficking weapons. The SEBIN report contains a photo of an agent pointing to an automatic rifle on the road where Geara was arrested. Agents said the rifle was in Geara’s vehicle, according to the report.

Three colleagues from Geara’s Popular Will party said SEBIN operatives had been tracking him recently, photographing him at political events. The government, they said, was unhappy with his criticisms and his role helping local charities distribute food and medicine.

“The dictatorship believed these things made him a dangerous person,” said Luigi Pulcini, a Popular Will state official, who is also Geara’s cousin. “The tweets were the last straw.”