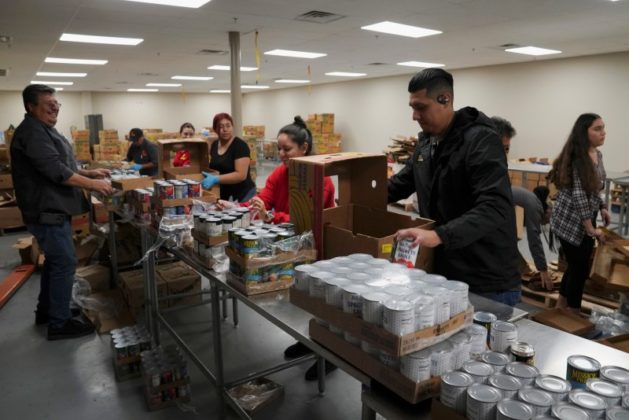 Laredo, Texas (Reuters) – Alberto Mendoza figures he can make it a couple of weeks on unemployment benefits before starting to decide which bills won’t get paid. The 26-year-old father of three lost his job training cooks when all the local restaurants started closing their doors and laying off staff.

“I have to pay rent, my truck bills; I have three children to support,” he said.

Mendoza is among thousands here in Laredo, Texas, along the southern U.S. border, who are teetering on the edge of financial ruin as the coronavirus pandemic takes hold – even though Laredo has seen no deaths and confirmed just nine cases by Tuesday evening. That’s a tiny figure compared to thousands of other hard-hit communities.

For an interactive graphic tracking coronavirus in the United States, click https://tmsnrt.rs/3bmK7N3

The plight of Laredo – a city of 260,000 located in one of America’s poorest counties – illustrates the breadth and depth of the economic pain radiating across the world as governments scramble to shut down commerce and issue stay-home directives to slow the pandemic. When city officials limited public gatherings – even funerals – to no more than 10 people, the local economy went off a cliff, despite the comparatively minor health impacts so far. The city’s rapid decline underscores the magnified fallout from the pandemic in economically fragile communities where most families live one or two missed paychecks away from desperation.

Poverty makes it much harder for people to isolate themselves to guard against infection or to seek proper care when they get sick, said Sandra Quinn, a professor at the University of Maryland’s School of Public Health.

“A pandemic like this just feeds on social inequities and existing health system disparities,” she said.

In surrounding Webb County, which includes Laredo, nearly a third of residents live beneath the federal poverty line, according to the U.S. Census Bureau. About as many don’t have health insurance. Nearly all the students in the city’s school system — now shuttered — were eligible for subsidized lunches or other government benefits.

Mendoza’s kids have insurance through Medicaid, the government-run health program for low-income families. Mendoza has no insurance at all. If he gets sick, he said, he would “go to the doctor and ask for a payment plan.”

Other families are already in the food line. One day last week, more than 800 people showed up at the South Texas Regional Food Bank for boxes of pasta, rice and other supplies. On a typical day before the pandemic, just 25 or 30 people might have stopped by the organization’s warehouse to get food to sustain their families through a rough patch.

Now, instead of coming inside to ask for help, they sat at laptop computers under an awning outside, no more than 10 at a time, using video chat to talk with workers who didn’t want to run the risk of becoming infected.

“You have to feel for these people,” said Alma Boubel, the food bank’s director.

The severity of the U.S. economic crisis will soon become more clear with releases of new data. Federal Reserve Bank of St. Louis President James Bullard recently predicted the U.S. unemployment rate may hit 30% in the second quarter – higher than during the Great Depression of the 1930s. Goldman Sachs analysts estimated that more than 2 million people applied for unemployment benefits last week alone, more than triple the previous record.

The unemployment rate in Webb County, estimated at 4.1% in January, was above the national average before the virus hit. Many of the region’s jobs are tied to the transportation industry that moves goods back and forth across the border with Mexico – traffic that U.S. President Donald Trump and the Mexican government have sharply curtailed in an effort to contain the disease.

Officials in Laredo and Webb County did not respond to questions about how they planned to handle the public health or economic shocks.

The realities of lower-wage work also often mean that people can’t shift their livelihoods to a home office, as professionals in higher-end jobs often can. That dynamic also complicates government efforts to stop the spread of disease through social isolation.

“Social distancing is hard, and of course many low-income people work at jobs that are physical, in-person, manual, and you have to show up,” said Sara Rosenbaum, a professor at George Washington University’s Milken Institute School of Public Health.

Studies after an outbreak of the H1N1 flu virus in the United States a decade ago found that minorities and lower-income families had a harder time separating themselves from other people in the way health authorities recommend. “They were less likely to be able to avoid public transportation, lived in larger households,” and had jobs that couldn’t be done remotely, Quinn said.

Ricarda Rios, 65, worked as a substitute teacher in Laredo before the schools closed. The system’s employees are still on the payroll, but not the subs. He said he is already “completely out of resources.”

That’s made it harder to steer clear of other people, especially when stores run short of basic supplies. “I have to go to different places until I get lucky and buy a dozen of eggs or a gallon of milk,” he said.

Carmen Garcia, the executive director of the Laredo Regional Food Bank, said she grasped the enormity of the crisis when she exhausted the supplies she bought for all of March just ten days into the month. Many of the people who come to her for help live in large families and work low-wage jobs that are now threatened. Many regularly seek cheaper medical care on the opposite side of the border with Mexico, which has been closed to non-essential travel.

“There’s a lot of worry now,” Garcia said. “Our clients, what they’re saying is they don’t know where else they can get assistance. They’re willing to risk their health. They can’t work right now, so they don’t have a paycheck. They need whatever food they can get.”