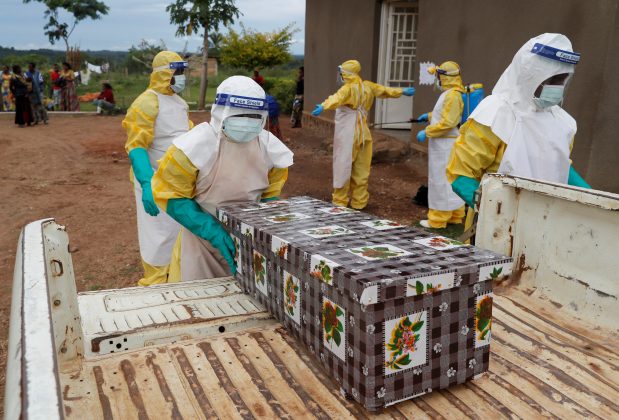 FILE PHOTO: Healthcare workers carry the coffin of a baby believed to have died of Ebola, in Beni, North Kivu Province of Democratic Republic of Congo, December 15, 2018. REUTERS/Goran Tomasevic/File Photo

LONDON, Dec 20 (Reuters) – Doubts are growing about whether the world’s emergency stockpile of 300,000 Ebola vaccine doses is enough to control future epidemics as the deadly disease moves out of rural forest areas and into urban mega-cities.

Outbreak response experts at the World Health Organization (WHO) and at the vaccines alliance GAVI are already talking to the leading Ebola vaccine manufacturer, Merck, to reassess just how much larger global stocks need to be.

“We’re actively engaged with the World Health Organization and with groups like GAVI, the U.S. government and others to try to understand what will be an appropriate sized stockpile in the future,” Merck’s head of vaccines clinical research, Beth-Ann Coller, said in a telephone interview.

Supply of the Merck shot, which is currently being used to fight a large and spreading outbreak of Ebola in the eastern Democratic Republic of Congo, is not a problem right now, according to the WHO’s deputy director-general of emergency preparedness and response, Peter Salama.

But the nature of Ebola outbreaks is changing, he told Reuters. As the virus finds its way out of rural villages into populous urban settings, plans for how to contain it in future must change too.

“What I’m concerned about is the medium- to long-term stockpile. The figure of 300,000 was very much based on previous Ebola outbreaks where you never really had huge numbers of cases because they were in isolated, rural, populations. But now, we increasingly see Ebola in mega-cities and towns.”

“We need to view it now as an urban disease as well as a rural one – and therefore one requiring a different order of magnitude of preparations, including vaccines,” he said.

Merck’s experimental Ebola vaccine, known as rVSV-ZEBOV, is the furthest ahead in development. Another potential vaccine being developed by Johnson & Johnson could also eventually become part of the stockpile, global health officials say.

Congo’s two Ebola outbreaks this year illustrate the shifting nature of the threat.

The first was relatively contained, infecting up to 54 people and killing 33 of them in an area of DRC’s Equateur Province that is remote and sparsely populated.

Several of the eight outbreaks before this one in Congo – including one in 2014 and another in 2017 both also in Equateur – were also quickly contained and limited in size.

But this year’s second outbreak in Congo – and the country’s tenth since the virus was first identified there in 1976 – is concentrated not in rural villages but in urban areas of the North Kivu and Ituri provinces.

It has already infected more than 450 people, killed more than 270, and last month spread to Butembo, a densely populated city of about one million.

This kind of prospect means global health emergency responders must “review our assumptions around Ebola”, Salama said. “If it were to take off in Butembo, or Goma, or, even worse, Kinshasa, we’d be talking about a totally different issue in terms of … vaccine supplies required.”

Seth Berkley, chief executive of the GAVI vaccines alliance which has an agreement with Merck to ensure a current stockpile of 300,000 rVSV-ZEBOV doses, told Reuters that around 40,000 doses had been used so far in the Congo outbreak.

The emergency response is based on “ring vaccination” which aims to control an outbreak by identifying and offering the vaccine to contacts of anyone likely to be infected. This method uses relatively small numbers of vaccine doses and forms a human buffer of immunity to try to prevent spread of the disease.

For now, in Congo, Berkley said, there is no immediate need to boost the stockpile. But looking towards future inevitable outbreaks, the numbers would likely need to change.

“The challenge we would have – and this has been under discussion – is if we started to do community-based vaccination in urban and semi-urban areas. That’s when the numbers would start to get quite big quite quickly,” he told Reuters.

Merck’s shot has proven safe and effective in trials in West Africa but has yet to be approved for a license by U.S. and European regulators, so is being used in the Congo outbreak under special emergency rules for experimental products.

When it gets approval, which Coller hopes would be in 2019, it will be made at a newly built manufacturing plant in Germany.

Coller said Merck is not yet clear how many doses a year, or a month, the German facility could churn out once it is in production, but she stressed the company would “work collaboratively with the public health agencies to do our best to support their needs”.