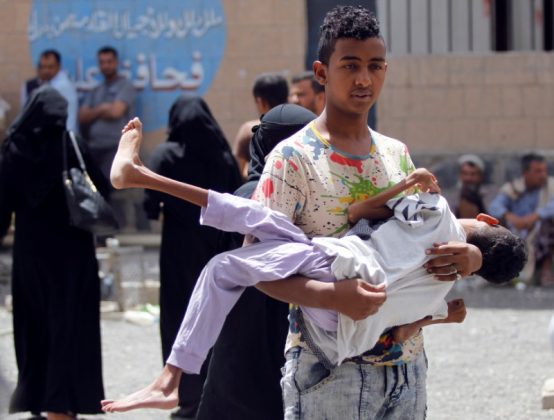 A displaced boy from Hodeidah city carries his brother who is affected by monoplegia, at a school where displaced people live, in Sanaa, Yemen June 22, 2018. REUTERS/Mohamed al-Sayaghi

“We hear loud explosions all the time,” Assem Mohammed, a 30-year-old pharmacist, said by telephone.

“We haven’t had water for three days.”

Mohammed, with his wife and six-month-old daughter, are among a dwindling number of residents who have remained in Hawak district, a neighborhood sandwiched between the airport, captured this week by the coalition, and the sea port, the latest target of the military offensive.

Whether through lack of funds or work or personal commitments, some families like Mohammed’s cannot escape.

Drivers transporting fleeing residents out of Hodeidah have more than doubled their fares since the battle began, while the hospital where Mohammed works has threatened employees with dismissal if they are absent for long periods.

“Electricity has also been cut in most of the city since three days, and in some neighborhoods for a week,” he said. He blamed the water shortage on damage to pipes that relief workers say has been caused by the Houthis digging trenches. Houthi officials could not immediately be reached for comment.

Since 2015 Hodeidah residents have used privately-owned generators to produce electricity. But this month’s offensive has left them struggling to obtain the necessary diesel oil.

Temperatures during summer in Yemen soar to above 40 degrees Celsius (104 F) in the shade, which along with lack of clean water could help spread disease.

Coalition leaders Saudi Arabia and the United Arab Emirates have pledged a swift operation to capture the Red Sea port, without entering the city center to minimize civilian casualties and maintain a flow of essential goods.

But its maritime port is a principal entry point for Yemen’s relief supplies, and the United Nations fears heavy fighting will worsen what is already the world’s most urgent humanitarian crisis, with 22 million Yemenis dependent on aid and an estimated 8.4 million believed to be on the verge of starvation. 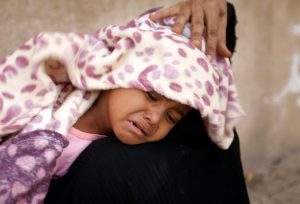 A displaced woman from Hodeidah city carries her sick daughter at a school where displaced people live, in Sanaa, Yemen June 22, 2018. REUTERS/Mohamed al-Sayaghi

“The level and degree of human suffering is heart-breaking,” Lise Grande, the U.N. humanitarian coordinator for Yemen said on Thursday. “Of all the things we are worried about, cholera is top of the list.”

“It wouldn’t take much to start an unstoppable outbreak.”

Dozens of displaced families have been relocated to schools in the city, Mohammed Kassem, Hodeidah ICRC system manager, told Reuters as relief workers distributed food bags at one facility.

“We ran away only with the clothes we were wearing,” said one woman while waiting to receive her share.

The coalition says it wants to prevent the Houthis receiving weapons and generating cash from imports, eventually forcing them to start talks on handing over power to the internationally recognized government of President Abd-Rabu Mansour Hadi.

Grande warned against cholera spreading “with lightning speed” if the water system breaks down and nothing is done to immediately address the situation.

U.N. officials estimate that in a worst-case scenario the fighting could cost up to 250,000 lives, especially if a cholera epidemic occurs in the widely impoverished region.

The Arab coalition intervened in the war in 2015 to roll back Houthi control of Yemen’s main population centers and reinstate its internationally recognized government. Coalition forces retook much of the south before the war, widely seen as a proxy conflict between Saudi Arabia and Iran, bogged down.

Tens of Hodeidah families have fled the fighting in Hodeidah for safety in the Houthi-held capital Sanaa, while others have headed to Raymah and Wusab, also in Houthi-ruled areas inland.

“They told us there’s an organization where we can register as refugees over here, but God knows,” said Marwan al-Barah, one of those displaced from Hodeidah.

In a Sanaa school, Reuters TV footage showed men who had fled Hodeidah queuing to register their families as displaced, while women sat on the floor in classrooms as their bare-foot children and toddlers played nearby.