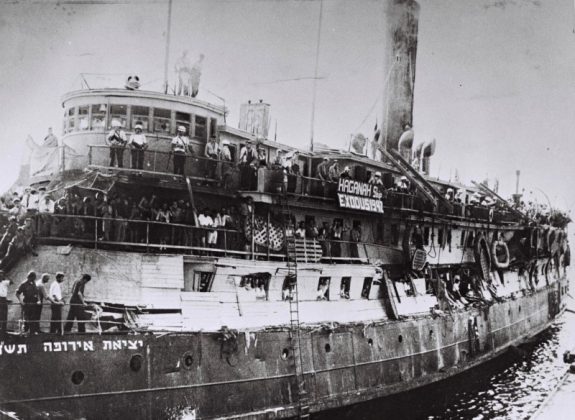 Illegal Jewish immigrants from Europe are seen on the ship "Exodus" in Haifa port in this March 22, 1947 file photo released by the Israeli Government Press Office (GPO) and obtained by Reuters on June 18, 2018. GPO/Frank Shershel/Handout via REUTERS

By Maayan Lubell and Rinat Harash

JERUSALEM (Reuters) – Prince William’s tour of Israel and the Palestinian Territories is the first official visit by a member of the royal family, but the Holy Land is familiar ground to the British state.

An older generation of Israelis and Palestinians can still remember British soldiers patrolling the streets of Jerusalem, Tel Aviv and Ramallah during the three decades that Britain controlled the territory.

British troops captured Jerusalem from the Ottoman Empire in 1917, and in 1922 the League of Nations awarded Britain an international mandate to administer Palestine during the post-war deal-making that redrew the map of the Middle East.

The award of the mandate also endorsed the 1917 Balfour Declaration, in which Britain expressed support for “a national home for the Jewish people” in Palestine.

In 1948, exhausted by World War Two and the strain of holding warring Jewish and Arab forces apart, the British withdrew.

Seventy years later, Israelis and Palestinians who lived through the era remember it very differently.

‘I DO NOT UNDERSTAND IT’

Under the British, the early Zionist movement was able to lay the groundwork for what would become modern Israel. Its parliament, laws and military bear traces of British influence, as do many buildings and street names.

But Israelis also remember how Britain restricted the number of Jews fleeing to Palestine from Nazi-controlled Europe. Tens of thousands who tried to enter illegally by sea were taken to detention camps in Cyprus and Palestine. 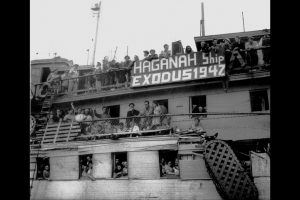 Illegal Jewish immigrants from Europe are seen on the ship “Exodus” in Haifa port in this July 18, 1947 file photo released by the Israeli Government Press Office (GPO) and obtained by Reuters on June 18, 2018. GPO/Hans Pinn/Handout via REUTERS

“We loved the British, but their policy, when it was against us, sparked anger and rage that are understandable,” said Shlomo Hillel, 95, a former Israeli diplomat and minister.

Hillel’s late wife, Suzanna, fled Austria when the Nazis annexed it in 1938. After a year at sea she was taken with her family to a British detention camp in Palestine, where they were held for another year.

“Until this day, I do not understand it,” Hillel said.

Hillel went on to operate a secret underground munitions factory beneath a kibbutz near Tel Aviv that had been set up as a cover for their clandestine bullet-making operations.

British soldiers would occasionally drop by at the kibbutz for routine visits. He hosted them with beer and sandwiches, but to avoid future surprise visits he served them undrinkably warm beer one summer day, telling them that if they gave him advance notice, “I can prepare the beer and keep it in the fridge.” After that, he always knew when the British were coming.

“The relationship wasn’t too favorable on the part of the British government of that time. But we’d rather now remember the positive aspects for which we are just the same thankful,” he said.

“After the Second World War, the state of Israel was founded on the cornerstones of the British rule in Palestine.” 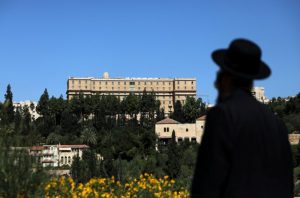 The King David Hotel, where Prince William will stay in Jerusalem, was built in the 1930s by Ezra Mosseri, a wealthy Egyptian Jewish banker.

Used by the British in the mandate era as a headquarters, in July 1946 it was bombed by the Irgun, an underground Jewish paramilitary force, killing more than 90 people. 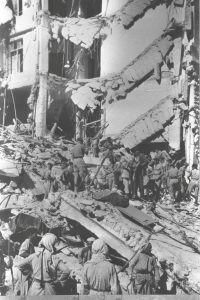 FILE PHOTO: Rescue workers are seen at the site of the King David Hotel in Jerusalem which has served as the British headquarters, and was bombed by Jewish Irgun paramilitary group killing more than 90 people, in this July 22, 1946 file photo released by the Israeli Government Press Office (GPO) and obtained by Reuters on June 18, 2018. GPO/Hugo Mendelson/Handout via REUTERS/File Photo

Mohammad Jadallah, 97, still remembers that day, when he had just turned up for his job as a waiter. The explosion “cut the room in half,” he recalls. “There was a state of panic. People were running in the dining room and in other places in the hotel.”

Less than two years later, Jadallah was no longer serving the British at tables – he was fighting on the Arab side in the war that broke out as the British era limped to a close.

‘BRITAIN GAVE OUR LAND TO THE JEWS’

Sitting under an apple tree in Dar Jarir village in the Israeli-occupied West Bank, Abdel-Fattah Shijaiyah mostly remembers the British as an unwelcome military presence who imprisoned his father and issued a death warrant on his brother for their involvement in an Arab uprising in the 1930s.

Shijaiyah, 96, had joined the police under the British “because of the state of poverty: there was no money and my father was in jail”.

His brother was never caught and was later pardoned. Shijaiyah himself later took up arms in the 1940s, as Arab feelings hardened against the British and the growing numbers of Jewish immigrants.

“We are convinced Britain gave our land to the Jews,” he said.

FOR THE TIME BEING

In dusty archives in Gaza, old British land records are still in use. The yellowing pages are stamped with the mandate-era name “Palestine Government”. The listed proprietor for some districts is recorded as “the High Commissioner, for the time being, in trust for the Government of Palestine”.

In Khan Younis refugee camp in the Gaza Strip, Ahmed Jarghoun, 75, displayed a document for a piece of land that, he says, his father bought and registered with the British authorities in 1944. The land lies on the other side of the Gaza-Israel border, in what is now the Israeli city of Lod.

“I want my land back,” he said. “We, as Palestinians, want our country back. Balfour gave what he did not own to those who were undeserving.”