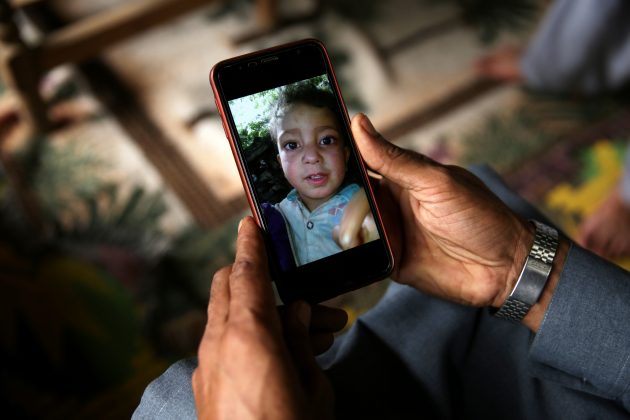 A relative displays the picture of 4-year-old Mohammad Ayan Ali, who, according to his family, was killed after he found a device that looked like a toy and exploded in his hands at home in the village of Jabri, in Neelum Valley, in Pakistan-administrated Kashmir. Pakistan's military says the device was an unexploded cluster bomb.. REUTERS/Saiyna Bashir

JABRI, Pakistan (Reuters) – Deep in the mountains of the Neelum Valley, where a river separates India and Pakistani Kashmir, is the small village of Jabri, usually far enough away to avoid being hit by exchanges of fire between the countries’ armies.

That changed late last month when Indian artillery shells hit the village and an unexploded device found its way into the hands of four-year-old Ayan Ali.

“He found a bomb that looked like a toy and he brought it here,” said Ali’s uncle, Abdul Qayyum, pointing to their home.

Ali showed the “toy” to his siblings as the family sat down to breakfast. It exploded, killing Ali and wounding eight of his siblings, his mother, and a young cousin.

“They tried to snatch it from him and then it exploded. He died on the spot,” Qayyum said, adding that two of the children are in hospital in critical condition.

Pakistan’s military said the device was a cluster bomb, a weapon that releases many smaller bomblets that can kill or wound people over a wider area. They are prohibited under the Geneva Convention governing international warfare.

The Indian government and army denied the allegation, and two army officials told Reuters that its shelling across the border was proportionate and in response to Pakistani fire.

On a visit to the Jabri area on Friday, a Reuters journalist was unable to independently verify the type of device that killed Ali, though there were signs of damage in the home.

A small crater in the concrete floor marked the place where Ali was standing when the device exploded.

“The little kids were playing and then there was a loud sound. There was smoke everywhere, I couldn’t see anything,” said Sadaf Siddiq, Ali’s older sister.

A shell hit another nearby home, opening a large hole in the roof but nobody inside was injured, said its 37-year-old owner Muhammad Hanif.

The Pakistan military said they had cleared a number of unexploded devices from the area. One military official showed a toy-sized device that he said was part of a cluster bomb, which could not be independently verified by Reuters.

Cross border exchanges of fire have intensified in recent years and India and Pakistan accuse each other of regularly violating a ceasefire agreement along the 740-km (460-mile) Line of Control (LoC), which serves as a de-facto border in the disputed Kashmir region.

Tensions increased this week after India set a new policy to revoke Jammu and Kashmir state’s rights to set its own laws, arrested hundreds of political leaders and activists, and severed nearly all communications from Indian Kashmir.

Both countries claim Kashmir and have fought two of their three wars over the Himalayan region, which they have disputed since partition and independence from British colonial rule in 1947.