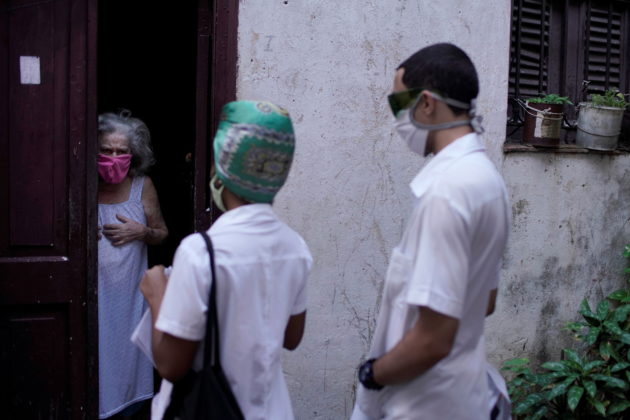 FILE PHOTO: Medicine students check door to door for people with symptoms amid concerns about the spread of the coronavirus disease (COVID-19), in Havana, Cuba, February 24, 2021. REUTERS/Alexandre Meneghini

By Kate Chappell and Sarah Marsh

KINGSTON (Reuters) – In Jamaica, which won praise for containing its coronavirus outbreak last year, patients now overflow into corridors on chairs and stretchers in some hospitals, prompting the Caribbean nation to open three emergency field hospitals.

While global new infections start to decline, a handful of countries across the Caribbean, including the larger islands of Jamaica and Cuba, are suffering their worst outbreaks since the start of the pandemic following social gatherings over year-end, quarantine violations by visitors and growing complacency.

The number of total confirmed cases has almost doubled in the first two months of the year in Jamaica. It has risen around fourfold in Cuba, eightfold in Barbados and around tenfold in St. Lucia and St. Vincent and the Grenadines, according to Oxford University’s Our World in Data database.

In one of the most tourism-dependent regions of the world, authorities have had to reimpose lockdowns and curfews, while reducing flights and hiking quarantine restrictions, further delaying a revival of their fragile economies.

Some Caribbean nations have started inoculating citizens – thanks, in particular, to an Indian donation of the AstraZeneca vaccine – yet broad coverage still looks far off. Cuba is launching late phase trials of two of its own vaccine candidates this month.

“Once the capacity of the health system becomes threatened, we could see a spike not only in the numbers infected but also in those dying from the disease,” Jamaican Prime Minister Andrew Holness warned in a broadcast address to the nation on Sunday.

The effect of COVID-19 in Caribbean countries has been mixed. In Jamaica, deaths have risen 1.4 times since the end of the year and now stand at 422. Cuba’s death toll of 324 is well under the world average per capital – a statistic the government largely puts down to a good healthcare system and experimental treatments – but the number of deaths has doubled there so far in 2021.

Tiny St Vincent and Grenadines registered its first COVID-19 death this year and has now had eight fatal victims.

While most of the Caribbean islands still have adequate hospital capacity to deal with the crisis, in Jamaica, all beds dedicated to COVID-19 isolation were full as of Feb. 26, according to the health ministry.

Holness announced more capacity was being added and lockdown restrictions tightened, including a new stay-at-home order for those aged 60 and above and a ban on access to beaches.

“We are not coping. We are physically and emotionally drained,” said a nurse who did not want to be named for fear of losing her job.

Caribbean leaders have complained about difficulty accessing vaccines and hoarding by rich nations amid a slow rollout of vaccines by the United Nations-backed COVAX alliance created to ensure poor countries across the world are not left behind.

Jamaica, which has nearly 3 million inhabitants, will receive a donation from India of 50,000 vaccine doses on or before Thursday, Health minister Christopher Tufton said on Sunday at the briefing alongside Holness.

The island nation should also start receiving its 124,800 doses via the COVAX facility this month, and 1.8 million via the African Medical Supply Platform from April.

But depending on which vaccine is secured, Jamaica still needed to source up to an extra 1.5 million doses to fulfill its aim of inoculating at least 65 % of the population by March 2022, Tufton said.

The prospects for an immediate economic recovery in the face of a slow vaccine roll-out are dim, said Therese Turner-Jones, general manager of the Caribbean Country Department for the Inter-American Development Bank.

“It’s going to be another difficult two years ahead,” Turner-Jones said. “Absent a healthy environment, there is not much you are going to do that will get back to business as usual.”

The Caribbean Development Bank said last Thursday it projected growth of 3.8% in its 19 borrowing member countries this year after a contraction of 12.8% last year, with vaccine availability one risk to that forecast.

Still, Cuba could hold a ray of light. It already came through for the Caribbean in terms of sending doctors to neighboring islands throughout the pandemic.

Now, the regional biotech heavyweight says it is already mass producing two of its four vaccine candidates in order to launch late phase trials in March.

Should its vaccine candidates triumph – becoming the first Latin American homegrown COVID vaccines to be approved – then its neighbors and regional allies could benefit.