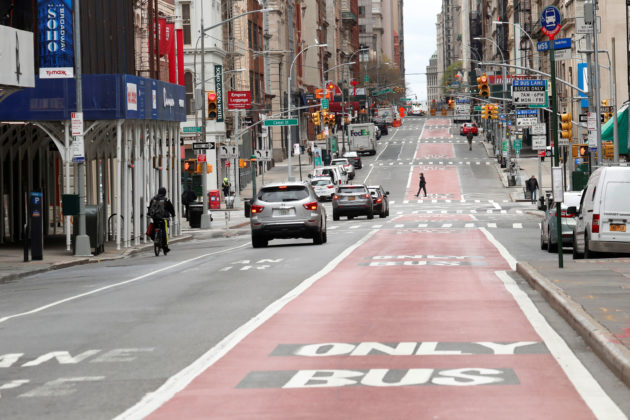 WASHINGTON (Reuters) – As Georgia lifted a ban on eating in restaurants and a handful of other U.S. states began easing other restrictions aimed at fighting the coronavirus pandemic, scientists warned the death toll would climb if governors reopen businesses prematurely.

The outbreak could take more than 74,000 U.S. lives by August, compared with an earlier forecast of 67,000, according to the University of Washington’s predictive model, often cited by White House officials and state public health authorities.

The university’s Institute for Health Metrics and Evaluation (IHME) said late on Monday that the number of U.S. deaths caused by the virus was not abating as quickly as previously projected after hitting a daily peak on April 15 with about 2,700.

With President Donald Trump’s administration forecasting an unemployment rate of more than 16% for April and residents chafing under stay-at-home orders, states from Alaska to Mississippi are seeking to restart their battered economies despite a lack of large-scale virus testing.

Texas Governor Greg Abbott said on Monday he would allow the state’s stay-at-home order to expire and begin reopening businesses including restaurants and retail shops in phases beginning on Friday.

The White House released a blueprint on Monday that put the onus on states to implement testing and rapid response programs, despite pleas from New York Governor Andrew Cuomo and others for federal help. It said states were responsible for identifying, and overcoming barriers to, efficient testing.

The U.S. government’s role was to “act as supplier of last resort,” the blueprint said. It would provide guidelines for easing restrictions and administering diagnostic tests, while providing technical assistance on how to best use testing technologies and align supplies with anticipated lab needs.

“It doesn’t set specific, numeric goals, offer a timeframe, identify ways to fix our broken supply chain, or offer any details whatsoever on expanding lab capacity or activating needed manufacturing capacity,” she said in a statement.

“Perhaps most pathetically, it attempts to shirk obviously federal responsibilities by assigning them solely to states instead,” she said.

After crowds jammed beaches over the weekend in California, Governor Gavin Newsom said social-distancing enforcement would be stepped up.

Deborah Birx, response coordinator for the White House coronavirus task force, urged Americans on Monday to go on sheltering in place and maintain social distancing until authorities lift their orders.

“We’re beginning to understand more and more that there may be an inverse relationship for how severe the disease is and your age. So younger people could actually be infected and not know they are infected and unintentionally pass the virus on,” she told Fox News on Tuesday.