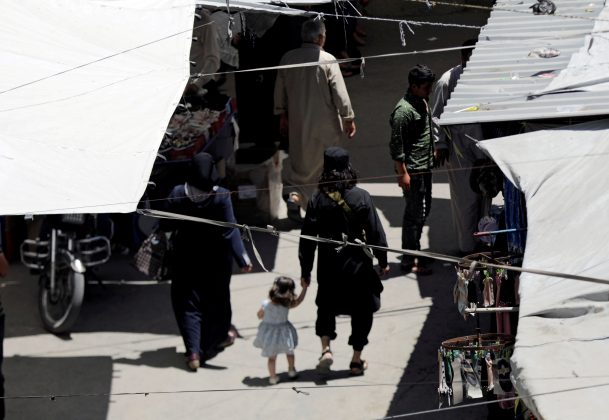 FILE PHOTO: A man with a gun holds the hand of a child as they walk in a souk in the city of Idlib, Syria May 25, 2019. REUTERS/Khalil Ashawi

By Tom Perry and Suleiman Al-Khalidi

BEIRUT/AMMAN (Reuters) – President Bashar al-Assad’s assault in the northwest has been met with a painful rebel counterpunch that underlines Turkish resolve to keep the area out of his hands and shows why he will struggle to take back more of Syria by force.

More than two months of Russian-backed operations in and around Idlib province have yielded little or nothing for Assad’s side. It marks a rare case of a military campaign that has not gone his way since Russia intervened in 2015. 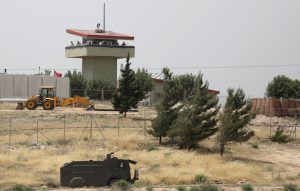 FILE PHOTO: Turkish soldiers stand on a watch tower at the Atmeh crossing on the Syrian-Turkish border, as seen from the Syrian side, in Idlib governorate, Syria May 31, 2019. REUTERS/Khalil Ashawi

While resisting government attacks, the insurgents have managed to carve out small advances of their own, drawing on ample stocks of guided anti-tank missiles that opposition and diplomatic sources say have been supplied by Turkey.

“They’re even targeting personnel with these missiles … it means they are comfortably supplied,” a rebel source said, speaking on condition of anonymity because he was discussing rebel military capabilities. Turkey’s foreign ministry did not immediately respond to a request for comment on reports that Ankara has stepped supplies of arms to rebels.

With Turkey committed to the rebels, the battle for the northwest stands in stark contrast to a campaign in the southwest a year ago, when Western and Arab states stood by as Assad and his Russian- and Iranian-backed allies took the area.

Despite Russian backing in the latest fighting, questions have arisen over whether Assad and his allies are entirely on the same page when it comes to the northwest, where Turkey has deployed forces in agreement with Russia and Iran.

Moscow has appeared keen to preserve its ties with Ankara even as its air force bombs in support of Assad: Turkey says Russia has intervened to stop attacks on Turkish forces from Syrian government-held territory.

And this time there has been no sign of a major role for Iranian-backed Shi’ite forces that have helped Assad to victories in parts of Syria that are of greater interest to Iran, including territory near Iraq, Lebanon and Israel.

The capture of the southwest a year ago remains Assad’s last big gain. The prospects of further advances have been obstructed not only by Turkish interests in the northwest but also the presence of U.S. forces in the east and northeast.

American troops are still supporting Kurdish-led fighters following a reversal of President Donald Trump’s decision last December to pull them all out.

After more than eight years of war, this leaves Syria carved up into areas of U.S., Russian, Turkish and Iranian influence that seem unlikely to be stitched back together any time soon.

“We could see the front lines harden and remain like that for some time, where either the appetite or capability to fight through them is not there on the part of the regime or its allies,” said a Western diplomat speaking anonymously in order to offer a candid assessment.

The Idlib area is dominated by Tahrir al-Sham, the jihadists formerly known as the Nusra Front. Proscribed as a terrorist group by the U.N. Security Council, the group has set aside past conflict with Turkish-backed rebels to defend the northwest.

Colonel Mustafa Bakour, a commander in the Jaish al-Izza rebel group, said coordination among rebels was a major factor in foiling government attacks.

“I expect the battles to continue for a time because it has become a bone-breaking battle,” he said in written answers to questions from Reuters.

The government campaign of airstrikes and barrel bombing that began in late April was followed by the capture of around 20 villages. This led to a rebel counter-attack in early June that seized ground the government has been unable to recover.

The Syrian government has described its operations as a response to militant violations of ceasefire agreements.

Russia says action was needed to stop attacks from being launched from Idlib, including drone strikes on its nearby airbase. President Vladimir Putin said in April a full-scale operation in Idlib was impractical for now.

Though the government has not declared the goals of the campaign, rebel sources believe it was to capture two highways that pass through rebel-held territory.

Some 300,000 people fleeing bombardment have moved toward the Turkish border since April, prompting the United Nations to warn that Idlib was on the brink of a “humanitarian nightmare”.

For Ankara, the Syrian opposition’s last major state sponsor, preventing another major influx of Syrian refugees is of paramount importance: Turkey already hosts 3.6 million of them.

While accusing the Syrian government of targeting civilians and its military observation posts in the Idlib area, Turkey has stopped short of blaming Russia, instead saying it would continue to cooperate with Moscow over the northwest.

The Turkish foreign ministry, in a written response to questions from Reuters, also said “necessary messages have been sent to Russian officials to end the attacks on our observation points and civilians” in the Idlib area.

Hundreds of civilians have been killed, as have many fighters on both sides, according to the Syrian Observatory for Human Rights.

Observatory Director Rami Abdulrahman described the operation as “a failure on all levels” for Russia and Damascus.

A Russian private military contractor who was based near Idlib province told Reuters that rebel fighters there are far more professional and motivated than their adversary. Pro-government forces cannot win the battle for Idlib unless Moscow helps them on the ground, he said.

A second Western diplomat said the government had suffered heavy casualties for minimal gains, which was “deeply embarrassing”. “Turkey is trying to tell them ‘you cannot take this militarily. You have to negotiate’,” the diplomat said.

A regional source close to Damascus described the escalation since April as a limited confrontation, saying Russia’s ties with Turkey were the main brake on any full-scale assault to take the entire northwest.

“Of course the regime has the desire to recover Idlib by force, but … without the Russians it can’t, because there are many militants and the Russians are completely committed to the Turks,” the source said. “It is expected that the situation in Idlib will stay as it is for a long time.”