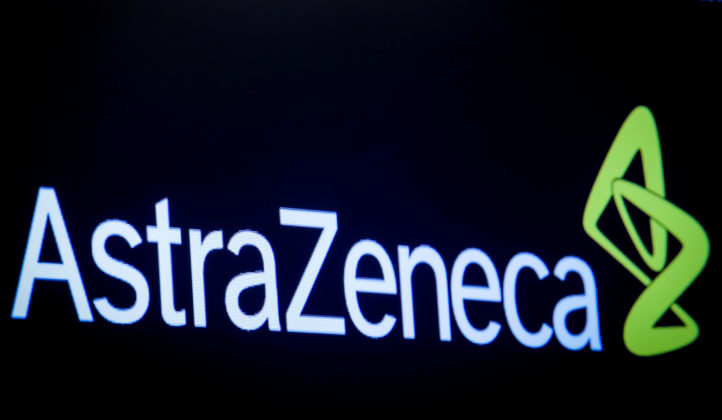 FILE PHOTO: The company logo for pharmaceutical company AstraZeneca is displayed on a screen on the floor at the New York Stock Exchange (NYSE) in New York, U.S., April 8, 2019. REUTERS/Brendan McDermid/File Photo

LONDON (Reuters) – AstraZeneca has suspended global trials of its experimental coronavirus vaccine after an unexplained illness in a participant, knocking the British drugmaker’s shares on Wednesday as prospects for an early rollout dimmed.

The vaccine to combat COVID-19, which AstraZeneca is developing with the University of Oxford, has been described by the World Health Organization as probably the world’s leading candidate and the furthest developed.

However, AstraZeneca said on Tuesday it had paused trials, including late-stage ones, to allow an independent committee to review safety data, and it was working to minimize any potential impact on the timeline.

The stakes are high because AstraZeneca, Britain’s largest drugmaker by market value, has already agreed to supply close to three billion doses to governments across the globe.

This is more than any other vaccine project, but asked whether the pause would set back the development process, Britain’s Hancock said: “Not necessarily, it depends on what they find when they do the investigation”.

Most states will contribute financially to developing the vaccine, even if the trial fails.

Britain’s medical regulator said it is urgently reviewing information available to determine whether trials can restart as quickly as possible.

A New York Times report citing a person familiar with the situation said a participant based in Britain was found to have transverse myelitis, an inflammatory syndrome that affects the spinal cord and is often sparked by viral infections.

Whether this was directly linked to AstraZeneca’s vaccine remains unclear, it said. AstraZeneca declined to comment.

A person familiar with the situation told Reuters the illness occurred in the British trial which began in May with more than 12,000 participants, from 5 years old to beyond 70.

The U.S. trial, with a targeted 30,000 participants, was launched last week for the vaccine AZD1222, which is also in late-stage clinical trials in Brazil and South Africa.

Additional trials are planned in Japan and Russia, with a targeted 50,000 participants globally.

South Korea said it would look into the suspension and review its plan to participate in manufacturing the vaccine and health ministry official Yoon Tae-ho added such suspensions of clinical trials were not rare “as various factors interact”.

This was echoed by Germany’s Leukocare, which is working on a vaccine similar to AstraZeneca’s but is at an earlier stage.

“When you are inoculating 20,000 people, it is a foregone conclusion that at some point you will have severe adverse events. As soon as a link to the vaccine can clearly be ruled out, the trial continues,” CEO Michael Scholl said.

Immune related conditions such as inflammations, however, would be subject to particular scrutiny, he added.

The Oxford vaccine is designed to instruct human cells to make distinguishing parts of the coronavirus. That allows the immune system to build an arsenal against future infections.

A harmless virus known as adenovirus is used to bring the genetic instruction into the body, an approach which is also being pursued by China’s CanSino, Russia’s Gamaleya institute or Johnson & Johnson.

Backers of the Gamaleya candidate, the first Russian COVID-19 vaccine, underscored the difference between their jab, based on a adenovirus in humans, and the British contender with an adenovirus found in monkeys.

“We have consistently drawn attention to human adenoviral platform being much safer and much more studied than any other new platform,” the head of Russia’s sovereign wealth fund Kirill Dmitriev told Reuters.

In choosing a monkey virus, AstraZeneca, as well as Leukocare, are trying to avoid the risk of the immune system attacking the vector, due to a previous bout with an adenovirus.

The decision to put the trial on hold has impacted clinical trials being conducted by other vaccine makers, which are looking for signs of similar reactions, Stat said.

Serum Institute of India said its trials of AstraZeneca’s vaccine were ongoing and had not faced any issues.

The U.S. National Institutes of Health, which is providing funding for AstraZeneca’s trial, declined to comment.

Moderna said in an emailed statement it was “not aware of any impact” to its ongoing COVID-19 vaccine study.

Leading U.S. and European vaccine developers pledged on Tuesday to uphold scientific safety and efficacy standards for their experimental vaccines.

Nine companies, including AstraZeneca, Moderna and Pfizer, issued an “historic pledge” after concerns that safety standards might slip under political pressure to rush out a vaccine.