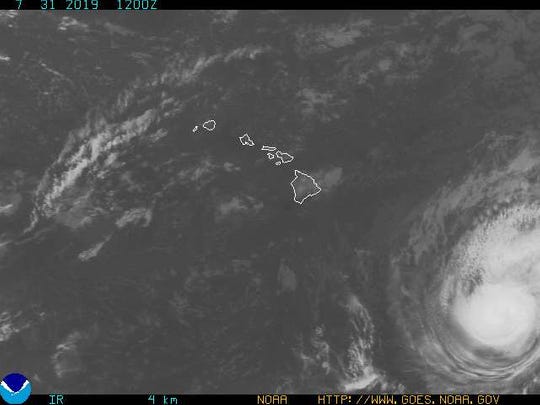 (Reuters) – Back-to-back hurricanes churned in the eastern Pacific on Wednesday towards Hawaii, with one set to lose punch when it reaches the U.S. archipelago state even as its mate gains might.

The closest to Hawaii was Hurricane Erick, which swelled from a tropical storm on Monday to a Category 4 hurricane on Tuesday on the Saffir-Simpson wind scale.

But it has since weakened to Category 3 with sustained winds of 125 mph (205 kph), the National Hurricane Center (NHC) in Miami said on Wednesday.

Erick is expected to continue to lose its might, dwindling back into a tropical storm by the time it makes its closest approach to Hawaii.

It is forecast to skirt south of the Big Island on Friday morning. Meteorologists see a higher chance of gale-force winds from the storm on the Big Island later this week.

Meanwhile, farther east in the Pacific, Hurricane Flossie, a Category 1 with sustained winds of 80 mph (130 kph), is expected to gradually gain power and speed over the next few days, the NHC said early on Wednesday.

It was about 1,150 miles (1,850 km) southwest of the Mexican state of Baja California, an advisory said, and was slowly headed west, getting stronger over the next few days.

The latest forecast shows it approaching the island by 8 p.m. Sunday, a forecaster at the NHC said.

(Reporting by Rich McKay in Atlanta; Editing by Andrew Cawthorne)