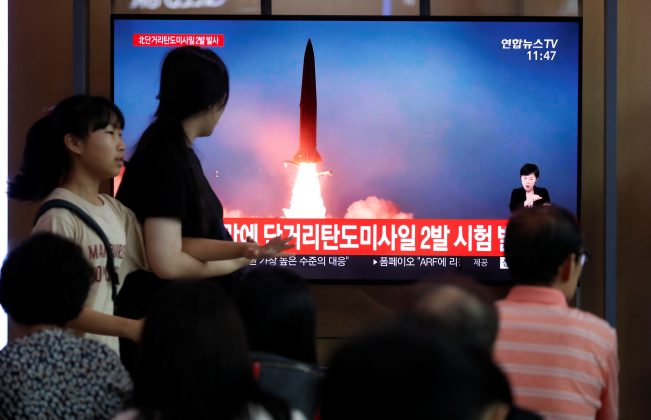 By Josh Smith and Hyonhee Shin

The series of missile tests raises the stakes for U.S. and South Korean diplomats crisscrossing the region this week in the hope of restarting talks aimed at persuading Pyongyang to give up its nuclear weapons and ballistic missile programs.

“North Korea’s actions do not help ease military tensions, nor do they help keep the momentum for talks that are underway,” South Korean Foreign Minister Kang Kyung-wha told reporters in Seoul before leaving for a Southeast Asian security forum in Bangkok.

U.S. Secretary of State Mike Pompeo and the top U.S. North Korea negotiator were also headed to the Association of Southeast Asian Nations (ASEAN) Regional Forum in the Thai capital, where Pompeo said he was holding out hope that U.S. officials could meet North Korean counterparts.

Trump and Pompeo both played down last week’s launches and Pompeo has continued to express hope for a diplomatic way forward with North Korea.

The latest launch comes ahead of newly appointed U.S. Secretary of Defense Mark Esper’s first official visit to Seoul, which the Pentagon said on Tuesday was scheduled as part of a tour through Asia in August.

Wednesday’s launches were from the Wonsan area on North Korea’s east coast, from which last week’s missiles had been fired, South Korea’s Joint Chiefs of Staff (JCS) said in a statement. It said it was monitoring in case of more launches.

The JCS said later the North had fired ballistic missiles that flew about 250 km (155 miles) and appeared to be similar to those of last week.

The missiles, dubbed the KN-23, are designed to evade missile defense systems by being easier to hide, launch, and maneuver in flight, experts said.

Kim described the two KN-23s launched last week as having a “low-altitude gliding and leaping flight” pattern that would make them hard to intercept.

Analysts said the range and altitude of Wednesday’s flights could indicate a demonstration or test of those capabilities.

South Korean defense minister Jeong Kyeong-doo told a defense forum in Seoul that stopping a missile like the KN-23 would be difficult, although South Korea’s missile defense systems would be able to detect and intercept them.

South Korea’s defense ministry also told lawmakers in Seoul it had concluded that a new submarine the North showcased last week was capable of carrying up to three ballistic missiles.

Japanese Prime Minister Shinzo Abe said there was no impact from Wednesday’s launch on Japan’s security.

“We will continue to closely cooperate with the United States and others,” Abe told reporters.

Trump and Kim met on June 30 in the Demilitarized Zone (DMZ) between the two Koreas but Pyongyang has since accused Washington of breaking a promise by planning to hold joint military exercises with South Korea next month and warned the drills could derail talks.

Later on Wednesday, state news agency KCNA repeated calls for the United States and South Korea to end their “hostile” joint drills, but did not mention the missile launches.

“It is a prerequisite for improving the inter-Korean relations and ensuring peace on the Korean peninsula to call an overall and permanent halt to anti-North war drills, the root cause of confrontation and war,” it said in a commentary.

Moves by the United States and South Korea to rename the approaching exercises were simply double-dealing that proved “confrontational maniacs remain unchanged in their black-hearted intention to stifle” North Korea by force, it added.

North Korea has also warned of a possible end to its freeze on nuclear and long-range missile tests that has been in place since 2017, which Trump has repeatedly upheld as evidence of the success of his engagement with Kim.

Henri Feron, a senior fellow at the Washington-based Center for International Policy, said the United States and South Korea may need to consider a temporary suspension of the drills, or propose other measures to reduce tensions.

“I do think there is a high risk that talks will end altogether if Washington and Seoul continue to ignore North Korea’s concern with the exercises,” he said.

A summit between Trump and Kim in Vietnam in February collapsed after they failed to reconcile differences between Washington’s demands for Pyongyang’s complete denuclearization and North Korean demands for sanctions relief.

Trump says he has a good relationship with Kim and Pompeo said on Monday he hoped working-level talks could occur soon.

Pompeo told reporters traveling with him to Asia on Tuesday he did not know when this would happen but hoped U.S. Special Representative for North Korea Stephen Biegun and his new counterpart could meet soon.

North Korean Foreign Minister Ri Yong Ho canceled a planned visit to the ASEAN forum in Bangkok but Pompeo said the Americans were still open to a meeting.

Harry Kazianis, of Washington’s Center for the National Interest think tank, said the latest launches were a clear attempt by North Korea to put pressure on Washington.

Other analysts have said North Korea will be emboldened to press more aggressively for U.S. concessions by Trump’s apparent eagerness to hold up his engagement with Pyongyang as a foreign policy success ahead of his 2020 re-election bid.

(Reporting by Hyonhee Shin and Josh Smith in SEOUL, Eric Beech and David Brunnstrom in WASHINGTON; Additional reporting by Kaori Kaneko and Chris Gallagher in TOKYO; Editing by Paul Tait and Clarence Fernandez)