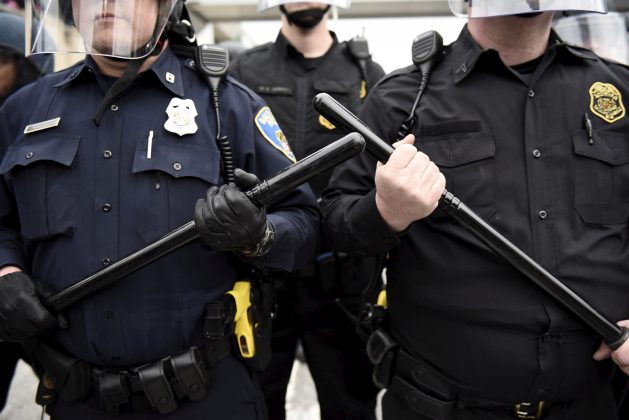 FILE PHOTO: Police are seen as demonstrators gather near Camden Yards to protest against the death in police custody of Freddie Gray in Baltimore, Maryland, U.S. on April 25, 2015. REUTERS/Sait Serkan Gurbuz/File Photo

(Reuters) – Baltimore police will put more officers on the street to battle a surge in killings that included six homicides in seven hours this week, part of a wave of deadly violence not seen in the port city in years, authorities said on Tuesday.

Patrol officers and detectives will go on 12-hour shifts through the weekend, instead of the normal 10-hour stints, and all other officers will be placed in squad cars or on foot patrols, Police Commissioner Kevin Davis said.

The six homicides raised the number of killings in the city of 620,000 people to 158 for the year. The pace is 27 percent ahead of that in 2015, when Baltimore notched its second-highest number of homicides this century, according to police figures.

“We’re just as angry and frustrated and ticked off about it as anyone else watching, and I expect people to be upset,” Davis said at a news conference.

The police commissioner said Baltimore was facing a lethal combination of drugs, guns and gangs as crime groups battled for turf. Officers this month seized 30 kg (66 pounds) of the opioid fentanyl and 15 kg (33 pounds) of heroin bound for West Baltimore, one of the deadliest gang battlegrounds, he said.

The overnight violence on Tuesday included a woman gunned down by a masked shooter and two people fatally shot in an apparent drug dispute, Davis said.

The East Coast city has increased coverage by officers during prior spikes in violence. Davis, who did not specify how many more officers would be on the streets, said officials would evaluate the effort’s results next week.

The violence comes as the Baltimore police department, the nation’s eighth biggest, is under a federal court order to remedy widespread civil rights abuses uncovered by a U.S. Justice Department review. The review was triggered by the 2015 death of a suspect from injuries in police custody that sparked arson and rioting.

Baltimore’s rise in homicides has tracked an uptick in U.S. murders. Preliminary Federal Bureau of Investigation data shows a 5.2 percent increase of murders in the first half of 2016 from the year before.

(Reporting by Ian Simpson in Washington; Editing by Colleen Jenkins and Jonathan Oatis)