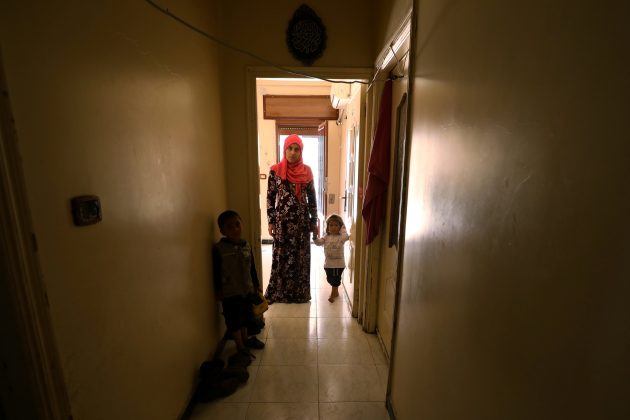 Noura Khodr Khalaf, 24, a Yazidi woman who was recently freed from Islamic State, stands with her children in a centre belonging to the Kurdish-led administration in Qamishli, Syria June 10, 2017. Picture taken June 10, 2017. REUTERS/Rodi Said

By Rodi Said and Ellen Francis

QAMISHLI, Syria/BEIRUT (Reuters) – Islamic State militants enslaved Noura Khalaf for three years, dragging her from her small Iraqi village across their territory in Syria. They bought and sold her five times before she was finally freed with her children last week.

Khalaf is one of many Yazidi women that Kurdish fighters in northern Syria have set out to free from Islamic State in covert operations, a female Kurdish militia commander told Reuters.

They have dubbed the operation “revenge for the women of Sinjar”, the homeland of Iraq’s ancient Yazidi minority which Islamic State overran in the summer of 2014.

The militants slaughtered, enslaved and raped thousands of people when they rampaged through northern Iraq, purging its Yazidi community. They abducted Yazidi women as sex slaves and gunned down male relatives, witnesses and Iraqi officials say. Nearly 3,000 women are believed to be still in captivity.

Nisreen Abdallah, a commander in the YPJ militia, said around 200 women and children from northern Iraq have been freed in various parts of Syria so far.

The Kurdish YPG militia and its all-female YPJ brigade rescued them in what she described as covert operations into IS territory that began last year. Abdallah declined to divulge more details for security reasons.

The Syrian militias launched this mission as part of their U.S.-backed offensive on Raqqa, Islamic State’s base of operations in Syria, she said.

With the YPG at its forefront, an alliance of Kurdish and Arab militias began pushing into Raqqa last week, after advancing on the city since November.

“Since then, we have been working to liberate the Yazidi women held captive by Daesh,” Abdallah said. In the case of Khalaf, she said Kurdish fighters made contact with her and drew up “an appropriate plan” to free her unharmed.

Noura Khalaf said she had been living with her children as the slave of an Islamic State militant in Syria’s Hama province for a year, when an unidentified man smuggled them out in the YPG-coordinated operation.

The plan took shape thanks to IS rules forbidding fighters from taking mobile phones to the frontlines, she said. The jihadist holding Khalaf left his at home, allowing her to call her brother who in turn asked the YPG for help.

“Abu Amir used to leave his phone at home when he went to the frontline,” said 24-year-old Khalaf. “I had memorized my brother’s number.”

Khalaf was eventually told to await contact from a man who would come to rescue her. He uttered a pre-agreed code word, so she would know it was safe to leave with him.

“I’m happy to be staying here,” she said, speaking to Reuters in the Syrian city of Qamishli in the Kurdish-controlled northeast. She will soon return to the Sinjar mountain region. “After I rest here, I will go meet my brother,” she said.

After Islamic State kidnapped Khalaf with her four children in 2014, they bussed her around northern Iraq, including Mosul, along with dozens of women from her hometown of Kojo in Sinjar. “I still don’t know what happened to my husband,” she said.

At one point in her captivity, militants kept her in an underground jail in Raqqa, she said, and at another, they held her in a prison in Palmyra.

“They took us to an underground market for selling women, where they displayed us for Islamic State members and each one picks the girl he likes,” she said. Fighters forced her to serve and cook for them, some beating and raping her repeatedly.

Now, Khalaf and her children are staying at a shelter run by the women’s council of the Kurdish-led administration in northeast Syria.

Abdallah, the YPJ commander, said they deliver the women to their relatives in northern Iraq by coordinating with a Yazidi committee around Sinjar.

Two months earlier, Kurdish fighters also rescued Khalaf’s seven-year-old daughter, who had been sold off near Raqqa, and sent her to relatives in Sinjar, she said.

“We will also send Noura, through the women’s council. So she will see her daughter again,” Abdallah said.

“Those who are freed have been away from their relatives, living among Daesh for years…in alienation and degradation,” Abdallah said. “They have psychological complexes and they need care.”

The beliefs of the Yazidi community, which Islamic State regards as devil-worship, combine elements of several ancient Middle Eastern religions. Mass Yazidi graves have been found since U.S.-backed Iraqi forces seized Sinjar in 2015.