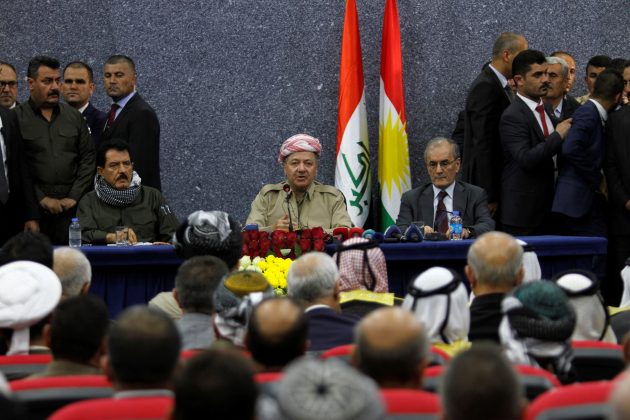 By Ahmed Rasheed and Raya Jalabi

BAGHDAD/ERBIL, Iraq (Reuters) – Iraq’s Kurdish leader Massoud Barzani vowed on Tuesday to press ahead with a referendum on Kurdish independence on Sept. 25 despite a vote by Iraq’s parliament to reject the move.

Earlier the parliament in Baghdad authorized the prime minister to “take all measures” to preserve Iraq’s unity. Kurdish lawmakers walked out of the session before the vote and issued statements rejecting the decision.

Western powers fear a plebiscite in Iraq’s semi-autonomous Kurdish region – including the oil-rich city of Kirkuk – could ignite conflict with the central government in Baghdad and divert attention from the war against Islamic State militants.

Iraq’s neighbors – Turkey, Iran and Syria – also oppose the referendum, fearing it could fan separatism among their own ethnic Kurdish populations.

“The referendum will be held on time… Dialogue with Baghdad will resume after the referendum,” Barzani, president of the Kurdistan Regional Government (KRG), said in a statement on his ruling party’s official website after the vote.

Barzani told a gathering of Kurds, Arabs and Turkmen in Kirkuk that the referendum was “a natural right”, according to a tweet from his aide Hemin Hawrami. Barzani also said Kirkuk should have a “special status” in a new, independent Kurdistan.

Iraqi lawmakers worry that the referendum will consolidate Kurdish control over several areas claimed by both the central government in Baghdad and the autonomous KRG in northern Iraq.

“This referendum lacks a constitutional basis and thus it is considered unconstitutional,” the parliamentary resolution said, without specifying what measures the central government should take to stop Kurdistan from breaking away.

Mohammed al-Karbouli, a Sunni Muslim lawmaker, said: “Kurdish lawmakers walked out of (Tuesday’s) session but the decision to reject the referendum was passed by a majority.”

A senior Kurdish official dismissed the vote as non-binding though an Iraqi lawmaker said it would be published in the official gazette after approval from the Iraqi presidency.

The KRG has said it is up to local councils of disputed regions in northern Iraq to decide whether to join the vote.

Kirkuk, an ethnically mixed city, voted last month to participate in the referendum, a move that stoked tensions with its Arab and Turkmen residents, as well as with Baghdad.

Kurdish peshmerga forces took control of the Kirkuk area and other areas claimed by both Baghdad and the Kurds after Islamic State militants overran about a third of Iraq in 2014 and Baghdad’s local forces disintegrated.

At a news conference on Tuesday, Iraqi Prime Minister Haider al-Abadi said the Kurds were continuing to “illegally export” Kirkuk’s oil, and he called for urgent talks.

“I call upon the Kurdish leadership to come to Baghdad and conclude a dialogue,” Abadi said.

A Kurdish delegation met officials in Baghdad for a first round of talks in August concerning the referendum. An Iraqi delegation was expected to visit the Kurdish capital of Erbil in early September for a second round of talks, but the visit has yet to happen with less than two weeks before the vote.

Kurds have sought an independent state since at least the end of World War One, when colonial powers divided up the Middle East after the collapse of the multi-ethnic Ottoman Empire and left Kurdish-populated territory split between Turkey, Iran, Iraq and Syria.