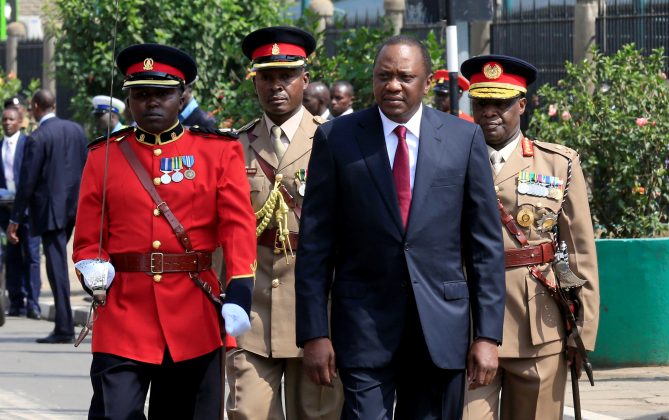 Kenya's President Uhuru Kenyatta walks to inspect the honour guard before the opening of the 12th Parliament outside the National Assembly Chamber in Nairobi, Kenya September 12, 2017. REUTERS/Thomas Mukoya

NAIROBI (Reuters) – Kenyan President Uhuru Kenyatta opened parliament on Tuesday by warning against divisive and destructive politics, while opposition lawmakers boycotted the legislature and rallied to demand the resignation of election officials.

While calling for unity and respect for the constitution, Kenyatta delivered a thinly veiled warning to the opposition lawmakers who had chosen to stay away from parliament.

“My government will not tolerate anyone intent on disrupting our hard-won peace and stability. Under no circumstances must Kenyans ever allow our free competitive processes to become a threat to the peace and security of our nation,” he said, to foot-stamping and cheering from ruling party legislators.

“We shall continue to encourage vibrant democratic competition, we shall not allow destructive division.”

As he spoke, opposition leaders held a rally in Kibera, the capital’s largest slum, rejecting the Oct. 17 date unless officials on the election board, whom they blame for mishandling the polls, resign.

“Now we are putting it squarely to you that the Supreme Court of this country has found you incompetent,” said Kalonzo Musyoka, running mate of Kenyatta’s presidential rival Raila Odinga.

The surprise election annulment initially raised fears of short-term political turmoil in Kenya, the region’s richest nation and a staunch Western ally in a region roiled by conflict.

But it also raised hopes among frustrated opposition supporters, who believe the last three elections have been stolen from them, that the east African nation’s tarnished courts could deliver them justice.

That hope helped tamp down protests that threatened to spark the kind of violence that followed disputed 2007 elections, when around 1,200 people were killed in ethnic bloodletting.

In a separate development, a ruling party lawmaker and a former opposition senator appeared in a Nairobi court, charged with incitement to violence over speeches they had made in the past week. Both were freed on a 300,000 Kenya shilling ($3,000) bond.

A government body monitoring hate speech says that it has seen a spike since the Supreme Court ruling. More than three times as many incidents were reported in the week following the ruling than during the whole 10-week election campaign, it said.