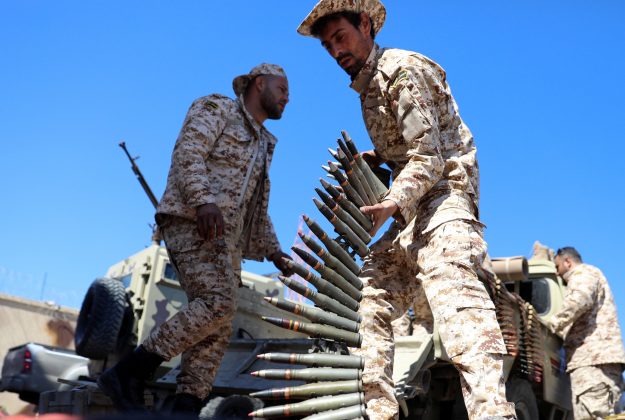 A Member of Misrata forces, under the protection of Tripoli's forces, prepares himself to go to the front line in Tripoli Libya April 8, 2019. REUTERS/Hani Amara

TRIPOLI/BENGHAZI, Libya (Reuters) – A warplane attacked Tripoli’s only functioning airport on Monday as eastern forces advancing on Libya’s capital disregarded global appeals for a truce in the latest of a cycle of warfare since Muammar Gaddafi’s fall in 2011.

The fighting threatens to disrupt oil supplies, fuel migration to Europe and wreck U.N. plans for an election to end rivalries between parallel administrations in east and west.

The eastern Libyan National Army (LNA) forces of Khalifa Haftar – a former general in Gaddafi’s army – said 19 of its soldiers had died in recent days as they closed in on the internationally recognized government in Tripoli.

A spokesman for the Tripoli-based Health Ministry said fighting in the south of the capital had killed at least 25 people, including fighters and civilians, and wounded 80.

The United Nations said 2,800 people had been displaced by clashes and many more could flee, though some were trapped.

“The United Nations continues to call for a temporary humanitarian truce to allow for the provision of emergency services and the voluntary passage of civilians, including those wounded, from areas of conflict,” it said in a statement.

But that seemed to fall on deaf ears. Matiga airport, in an eastern suburb, said it was bombed and a resident confirmed the attack. No more details were immediately available.

Haftar’s LNA, which backs the eastern administration in Benghazi, took the oil-rich south of Libya earlier this year before advancing fast through largely unpopulated desert regions toward the coastal capital.

Seizing Tripoli, however, is a much bigger challenge for the LNA. It has conducted air strikes on the south of the city as it seeks to advance along a road toward the center from a disused former international airport.

However, the government of Prime Minister Fayez al-Serraj, 59, is seeking to block the LNA with the help of allied armed groups who have rushed to Tripoli from nearby Misrata port in pickup trucks fitted with machine guns.

A Reuters correspondent in the city center could hear gunfire in the distance southwards.

Serraj who comes from a wealthy business family, has run Tripoli since 2016 as part of a U.N.-brokered deal boycotted by Haftar. His Tripoli government has reported 11 deaths in the last few days, without saying on which side.

U.N. envoy Ghassan Salame met Serraj in his office in Tripoli on Monday to discuss “this critical and difficult juncture”, the world body’s Libya mission said.

The violence has jeopardized a U.N. plan for an April 14-16 conference to plan elections and end anarchy that has prevailed since the Western-backed toppling of Gaddafi eight years ago.

The U.N. refugee agency expressed anxiety about thousands caught in cross-fire and detention centers in conflict zones in a “rapidly deteriorating humanitarian situation”.

As well as the United Nations, the European Union, United States and G7 bloc have all urged a ceasefire, a halt to Haftar’s advance and return to negotiations.

Haftar casts himself as a foe of extremism but is viewed by opponents as a new dictator in the mould of Gaddafi, whose four-decade rule saw torture, disappearances and assassinations.

The LNA says it has 85,000 men, but this includes soldiers paid by the central government that it hopes to inherit. Its elite force, Saiqa (Lightning), numbers some 3,500, while Haftar’s sons also have well-equipped troops, LNA sources say.

Analysts say Haftar has swelled his ranks with Salafist fighters and tribesmen as well as Chadians and Sudanese from over the southern borders, claims dismissed by the LNA.

Since NATO-backed rebels ousted Gaddafi, Libya has been a transit point for hundreds of thousands of migrants trekking across the Sahara in hope of reaching Europe across the sea.

Islamic State staged some high profile attacks in Tripoli last year, but the militant group has largely retreated to the desert of southern Libya since the loss of its former stronghold in Sirte late in 2016.

France, which has close links to Haftar, said it had no prior warning of his push for Tripoli, a diplomatic source said.

France established close relations with Haftar under the Socialist government of Francois Hollande and his defense minister Jean-Yves Le Drian.

When President Emmanuel Macron named Le Drian his foreign minister, Paris doubled down support to Haftar, in close alignment with Egypt and the United Arab Emirates, which see him as a bulwark against Islamists and have supported him militarily, according to U.N. reports.

France’s stance has created tensions with Italy, which has sought a leading role to end the turmoil in its former colony that has played into the hands of militants and smugglers.