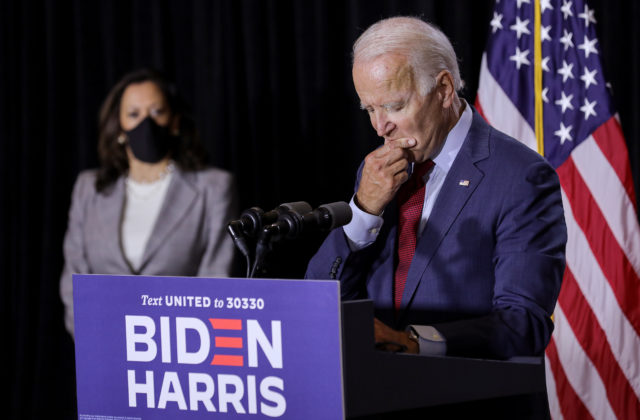 WILMINGTON, Del. (Reuters) – Democratic presidential contender Joe Biden on Thursday called on all U.S. governors to mandate mask wearing to slow the spread of the coronavirus that has killed more than 165,000 people in the United States.

In his second day on the campaign trail with former rival and now running mate Kamala Harris by his side, Biden made the call for a nationwide mandate on masks after a virtual meeting with public health advisers in his hometown of Wilmington, Delaware.

“Every single American should be wearing a mask when they’re outside for the next three months,” Biden said. “Every governor should mandate mandatory mask wearing.”

He said that early delays in calling for masks led to unnecessary deaths.

President Donald Trump, the man he is trying to unseat in November, long refused to wear one in public. That turned masks into a political symbol and sparked squabbles across the country in which other Republican elected officials and some Trump supporters have angrily refused to wear them.

Public health officials agree that wearing masks in public slows the spread of the respiratory disease that has infected more than 5.2 million Americans.

“I hope we’ve learned our lesson. I hope the president has learned his lesson,” said Biden, the former vice president.

“Because there may be some grand gestures offered by the current president about a vaccine but it really doesn’t matter until you can answer the question ‘When am I going to get vaccinated.’”

The first Black woman and Asian American on a major-party U.S. presidential ticket, Harris will have three roles to play in the campaign: energizing people to vote and volunteer, outlining Biden’s policy vision, and prosecuting the case against Trump, according to a person familiar with the strategy.

Trump long played down the risks of the coronavirus pandemic, which has killed more people in the United States than in any other country and thrown tens of millions of Americans out of work.

Harris is expected to focus on Trump’s response to the crisis, which has been an effective argument for Biden so far.

After introducing Harris’ personal story on Wednesday in their first joint appearance since picking his running mate, Biden quickly moved to talking about the urgency of the moment.

Trump, for his part, on Thursday tweeted that the media were giving Harris “a free pass despite her Radical Left failures and very poor run in the Democrat Primary.”

A Trump ally conceded privately that the Democratic pair had a “good day” on the campaign trail. Biden’s campaign said they collected $34.2 million on Tuesday and Wednesday after announcing Harris as the running mate, a record pace of fundraising.

In her debut appearance as Biden’s running mate on Wednesday, Harris delivered a rebuke of Trump’s leadership and highlighted the historic significance of her new role.

In the coming weeks, Harris will do events in person and virtually, including several jointly with Biden, similar to some of the socially distanced campaign stops and speeches Biden has given in recent weeks in Delaware and Pennsylvania.

The campaign is still unsure of how they will conduct future appearances, saying they intend to follow local public health guidance that continues to discourage large gatherings.