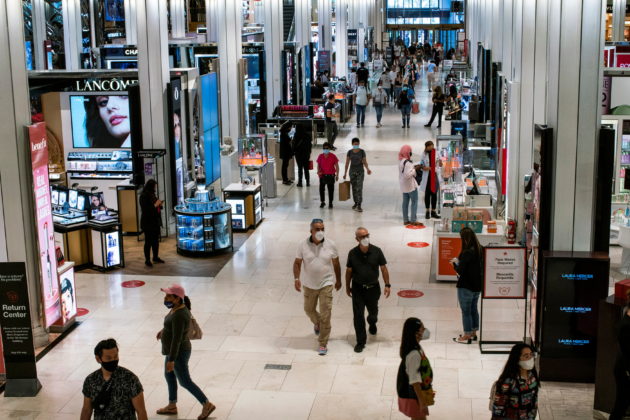 By Steve Holland and Andrea Shalal

WASHINGTON (Reuters) -U.S. President Joe Biden on Monday said an increase in prices was expected to be temporary, but his administration understood that unchecked inflation over the longer term would pose a “real challenge” to the economy and would remain vigilant.

Biden said he told Federal Reserve Board Chair Jerome Powell recently that the Fed was independent and should take whatever steps it deems necessary to support a strong, durable recovery.

“As our economy comes roaring back, we’ve seen some price increases,” Biden said, while rejecting concerns the recent increases could be a sign of persistent inflation.

He said his administration was doing all it could to address supply chain bottlenecks that had pushed up the price of cars, and noted that lumber prices were now easing after spiking higher early in the recovery.

“I want to be clear: my administration understands that were we ever to experience unchecked inflation in the long term, that would pose a real challenge for our economy,” he said. “While we’re confident that isn’t what we’re seeing today, we’re going to remain vigilant about any response that is needed.”

Biden said he had also made that point clear to Powell: “The Fed is independent. It should take whatever steps it deems necessary to support a strong, durable economic recovery.”

Growing concerns about inflation dragged U.S. consumer sentiment in early July to its lowest level in five months, a survey showed Friday, after a 0.9% jump in consumer prices in June, the biggest increase in 13 years, but economists continue to believe that higher inflation is transitory.

The Democratic president said his plans to invest more in infrastructure, as well as better care for older people and children, would help reduce inflationary pressures in the future by boosting productivity.

“These steps will enhance our productivity, raising wages without raising prices,” he said. “It will take the pressure off of inflation, give a boost to our workforce which leads to lower prices in the years ahead.”

He said critics had warned repeatedly that his economic policies would lead to an end to capitalism, but economists were now predicting the United States would hit its highest economic growth rate in 40 years.

“It turns out capitalism is alive and very well,” he said. “We’re making serious progress to ensure that it works the way it’s supposed to work for the good of the American people.”