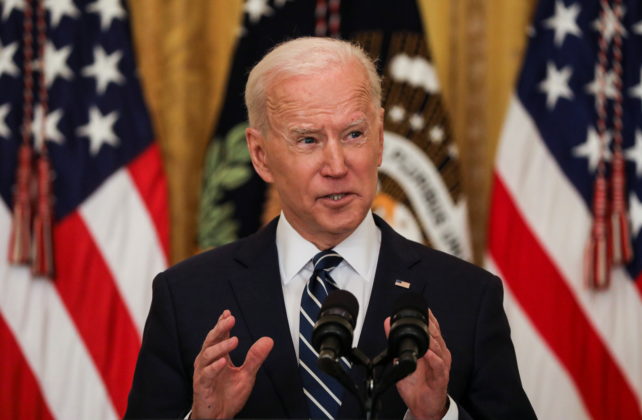 By Jarrett Renshaw and Steve Holland

WASHINGTON (Reuters) -President Joe Biden on Thursday defended his policy of providing shelter to unaccompanied children crossing the U.S. border from Mexico at a news conference where he was repeatedly pressed on his handling of immigration issues.

Biden also set a new goal of administering 200 million vaccination shots against COVID-19 in the United States in his first 100 days in office and claimed economic progress as he held his first solo news conference since taking office.

Struggling to contain a surge in border crossings, Biden told reporters that no previous administration had refused care and shelter to children coming over from Mexico – except that of his predecessor, Donald Trump.

“I’m not going to do it,” Biden said, noting he had selected Vice President Kamala Harris to lead diplomatic efforts with Mexico, Honduras, Guatemala and El Salvador aimed at stemming the migration flow.

Appearing in the White House East Room, Biden said his initial goal of administering 100 million vaccination shots in his first 100 days in office was reached last week, 42 days ahead of schedule.

“I know it’s ambitious, twice our original goal, but no other country in the world has even come close,” said Biden.

He also claimed economic progress with the news that the number of people claiming unemployment insurance had dropped significantly.

“There are still too many Americans out of work, too many families hurting and still a lot of work to do. But I can say to the American people: Help is here and hope is on the way,” he said.

Biden called for Republicans in the U.S. Congress to help him move forward with his agenda or “continue the politics of division” as he takes on issues like gun control, climate change and immigration reform.

“All I know is I was hired to solve problems, not create divisions,” he said.

Biden was repeatedly pressed to defend his migration policy along the U.S. border with Mexico.

Biden said the increase in migration was cyclical.

He said many migrants were fleeing problems in their home countries and blamed Trump, for dismantling parts of the U.S. immigration system.

Most of Biden’s predecessors had held their first news conference in their first two months in office, but the Democratic incumbent has so far taken few questions.