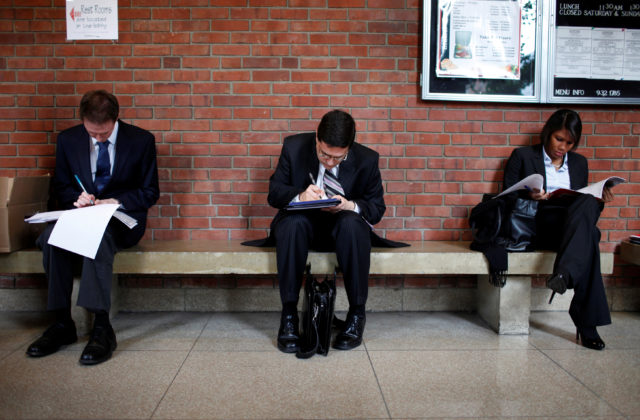 (Reuters) – President Joe Biden is presenting his plan on Friday for addressing one of the greatest challenges created by the COVID-19 pandemic – how to get millions of out-of-work Americans back on the job.

The labor market regained some minor ground in January when the economy added 49,000 jobs, according to a report released Friday by the Labor Department. But the report showed labor market growth is stalling, doing little to close the huge gap created by the pandemic

“At that rate it’s going to take 10 years before we get to full employment,” Biden said Friday morning from the White House.

Roughly half of the 22 million jobs lost at the height of the pandemic have been recouped. But that still leaves a hole of about 10 million jobs, disproportionately ones held by women and minorities in low-wage roles.

Here is a look at the people who may need the most help as the economy heals:

As the economy reopened last year from widespread shutdowns, many office workers adjusted to working remotely and other industries called people back to their jobs.

But many Black, Hispanic and Asian workers who were overrepresented in the low-wage occupations most affected by the pandemic, including servers, bartenders, cooks and housekeepers, are still unemployed.

The overall unemployment rate dropped to 6.3% in January. But within that rate are huge racial disparities – over 9% of Black workers are unemployed, versus less than 6% of white workers:

Before the pandemic, the share of women either working or looking for work was rising, thanks to a record-long economic expansion.

The crisis reversed those gains, in part because the closures of schools and child care centers left working mothers with a weaker support system.

Some 2.5 million woman dropped out of the labor force during the pandemic, compared to 1.8 million men, according to data from the Labor Department.

Biden says he wants to help more women get back to work through policies that reopen schools safely and make childcare more affordable.

Businesses that rely on travel or on people spending time close to each other indoors have rebounded the slowest, and many people who made their living by staffing kitchens, mixing drinks or cleaning hotel rooms are still out of work.

Employment in leisure and hospitality was down 23% in January from pre-pandemic levels in February 2020, more than any other industry.

Economists expect many of those jobs to return after coronavirus vaccines are distributed widely and consumers feel more comfortable spending money in restaurants, bars and other entertainment venues. But it’s not clear whether employment will return completely to previous levels.

Job searches have stretched on for some people, including many in the leisure and hospitality industry.

The “long-term unemployed,” or those who have been out of work for at least six months, now make up about 40% of the total unemployed, or about 4 million people, up from about 20% before the pandemic.

Research shows people who are long-term unemployed can have a harder time finding new jobs, putting them at greater risk of facing pay cuts or of dropping out of the labor market.

Biden wants to create federally subsidized jobs in healthcare, clean energy and other fields that could help the long-term unemployed move into new roles.

Designing federal policies to help the out of work may be especially challenging because job losses vary widely from one state to the next.

Employment in Idaho, Utah and Kansas had fully recovered to pre-pandemic levels by December. But the situation was more dire in New York and tourism-dependent Nevada and Hawaii.

This could lead to wide disagreements among lawmakers about how much more aid is needed to nurse the economy, and the labor market, back to health.