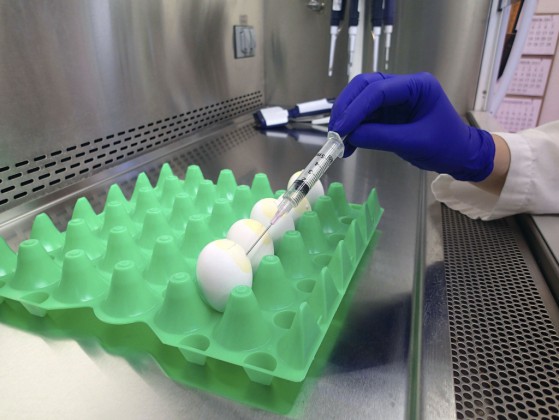 The Avian influenza virus is harvested from a chicken egg as part of a diagnostic process in this undated U.S. Department of Agriculture (USDA) handout image. REUTERS / Erica Spackman / USDA / Handout via Reuters

CHICAGO (Reuters) – A commercial flock of 17,000 chickens in Tennessee has been culled after becoming infected with low-pathogenic bird flu, state agricultural officials said on Thursday, days after a more dangerous form of the disease killed poultry in a neighboring county.

Authorities killed and buried chickens at the site in Giles County, Tennessee, “as a precaution” after a case of highly pathogenic flu in Lincoln County led to the deaths of about 73,500 chickens over the weekend, according to the Tennessee Department of Agriculture. It said officials did not believe birds at one premise sickened those at the other.

Highly pathogenic bird flu is often fatal for domesticated poultry and led to the deaths of about 50 million birds, mostly egg-laying hens, in the United States in 2014 and 2015. Low-pathogenic flu is less serious and can cause coughing, depression and other symptoms in birds.

The highly pathogenic case in Tennessee was the first such infection in a commercial U.S. operation in more than a year and heightened fears among chicken producers that the disease may return.

The spread of highly pathogenic flu could represent a financial blow for poultry operators, such as Tyson Foods Inc and Pilgrim’s Pride Corp, because it would kill more birds or require flocks to be culled. It also would trigger more import bans from other countries, after South Korea, Japan and other nations limited imports because of the case in Lincoln County.

Jack Shere, chief veterinary officer for the U.S. Department of Agriculture, said in an interview that there was speculation the highly pathogenic virus found in Tennessee shared similar characteristics with a low-pathogenic virus that circulated in Tennessee, Kentucky, Minnesota and Illinois in 2009.

Wild migratory birds can carry the flu without showing symptoms and spread it to poultry through feces, feathers or other contact.

Both cases in Tennessee were located along the state’s southern border with Alabama, one of the country’s top producers of “broiler” chickens for meat. They also were both in facilities for chickens that bred broiler birds and involved the same strain, H7N9, according to Tennessee’s agriculture department.

The state said it was testing poultry within a 10-kilometer radius of the Giles County site for the flu and so far had not found any other sick flocks.

H7N9 is the same name as a strain of the virus that has killed people in China, but U.S. authorities said the Tennessee virus was genetically distinct.

U.S. officials have said the risk of bird flu spreading to people from poultry or making food unsafe was low.

Low-pathogenic bird flu also was recently detected on a turkey farm in Wisconsin. Authorities there decided to keep the birds under quarantine until they tested negative for the virus, rather than to cull them, according to the state.