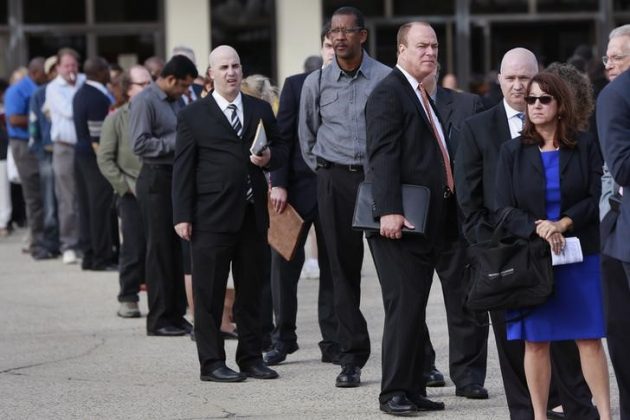 WASHINGTON (Reuters) – U.S. job growth increased more than expected in February and wages rose steadily, which could give the Federal Reserve the green light to raise interest rates next week despite slowing economic growth.

Nonfarm payrolls rose by 235,000 jobs last month as the construction sector recorded its largest gain in nearly 10 years due to unseasonably warm weather, the Labor Department said on Friday. The economy created 9,000 more jobs in December and January than previously reported.

The economy needs to create roughly 100,000 jobs per month to keep up with growth in the working-age population.

January’s wage growth was revised up to 0.2 percent from the previous 0.1 percent gain.

That lifted the year-on-year increase in wages to 2.8 percent from 2.6 percent in January.

The unemployment rate fell one-tenth of a percentage point to 4.7 percent, even as more people entered the labor market, encouraged by the hiring spree. Economists polled by Reuters had forecast employment increasing by 190,000 jobs last month.

With the labor market near full employment, wage growth could speed up as companies are forced to raise compensation to retain employees and attract skilled workers.

According to economists, wage growth of between 3 percent and 3.5 percent is needed to lift inflation to the Fed’s 2 percent target. But inflation is already firming, in part as commodity prices rise.

Rising inflation, together with a tighter labor market, stock market boom and strengthening global economy, has left some economists expecting that the Fed could increase rates much faster than is currently anticipated by financial markets.

The U.S. central bank lifted its benchmark overnight rate in December and has forecast three rate increases for 2017.

Job growth has averaged more than 186,000 per month since January 2010, a recovery that predates Donald Trump’s presidency. While Trump’s victory last November sparked a stock market rally and jumps in consumer and business confidence, there has been no surge in either business or consumer spending.

Data ranging from trade to consumer and business spending suggest the economy slowed further early in the first quarter after growing at a 1.9 percent annualized rate in the final three months of 2016. The Atlanta Fed is forecasting gross

domestic product growing at a 1.2 percent rate this quarter.

All sectors of the economy, with the exception of retail and utilities, expanded payrolls in February. Manufacturing employment increased 28,000, the largest increase since August 2013, as rising oil prices fan demand for machinery.

Retail sector employment fell 26,000 after a gain of 39,900 jobs in January. Retailers including J.C. Penney Co Inc <JCP.N> and Macy’s Inc <M.N> have announced thousands of layoffs as they shift toward online sales and scale back on brick-and-mortar operations.

Government payrolls increased by 8,000 jobs last month despite a freeze on the hiring of civilian federal government workers, which came into effect in January.