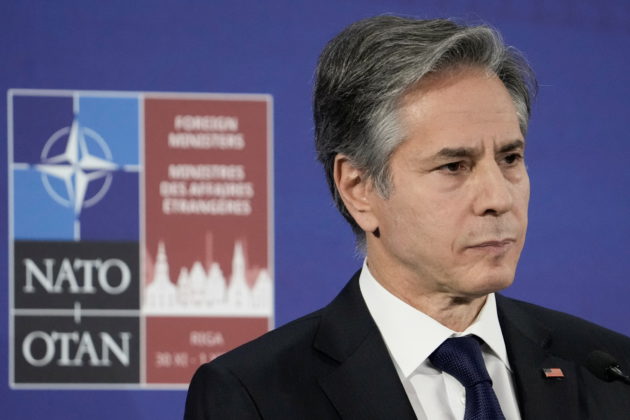 RIGA (Reuters) – The United States is deeply concerned by evidence that Russia has made plans for significant aggressive moves against Ukraine and will respond with a range of “high impact” economic measures if Moscow invades, U.S. Secretary of State Antony Blinken said.

Speaking after a NATO foreign ministers’ meeting on Wednesday in the Latvian capital Riga, Blinken said Russia’s plans included efforts to destabilize Ukraine from within as well as large-scale military operations.

Blinken offered the clearest U.S. assessment yet on what Russian President Vladimir Putin might be intending, setting the stage for a tense meeting on Thursday between the top U.S. diplomat and Russian Foreign Minister Sergei Lavrov.

“In recent weeks, Russia has stepped up planning for potential military action in Ukraine, including positioning tens of thousands of additional combat forces near the Ukrainian border,” Blinken said, in the most forceful U.S. comments yet on Russia’s recent moves.

Russia has previously said its posture towards Ukraine is purely defensive and it has accused Kyiv of plotting to recapture by force areas held by pro-Russian rebels in eastern Ukraine. Kyiv denies this charge.

Blinken said Putin was putting in place the capacity to invade Ukraine and said the United States must prepare for all contingencies, though he said it was not known whether the Russian leader had made the decision to invade.

“We’ve made it clear to the Kremlin that we will respond resolutely, including with a range of high impact economic measures that we have refrained from using in the past,” he said.

Blinken added that there was “tremendous solidarity” within the NATO alliance in willingness to pursue strong measures if Russia invades Ukraine.

“Should Russia reject diplomacy and reinvade Ukraine, we will be prepared to act,” he added.

(Reporting by Humeyra Pamuk in Riga and Simon Lewis and Doina Chiacu in Washington; Writing by Daphne Psaledakis; Editing by Gareth Jones)