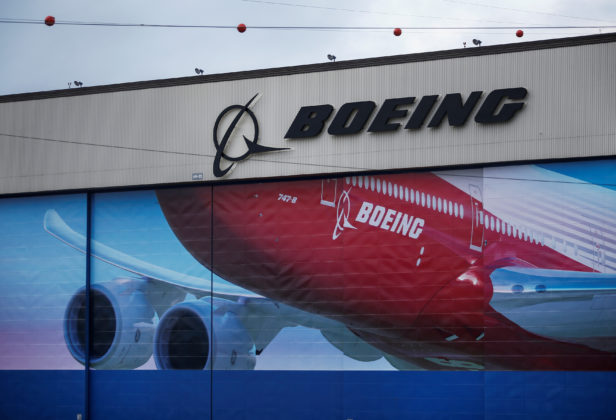 FILE PHOTO: A Boeing logo is seen at the company's facility in Everett after it was announced that their 777X model will make its first test flight later in the week in Everett, Washington, U.S. January 21, 2020. REUTERS/Lindsey Wasson

(Reuters) – Boeing Co <BA.N> slashed production on its widebody programs, delayed the arrival of its newest jet, and confirmed the demise of its iconic 747, as it reported a bigger-than-expected quarterly loss on Wednesday amid fallout from the COVID-19 pandemic.

The U.S. planemaker, which is also grappling with the 16-month-old ban on its 737 MAX after fatal crashes, delayed its timeline to hit build rates of 31 narrowbodies monthly to early 2022 from 2021, as the pandemic decimates new jet demand.

The production cuts reflect concern among aviation companies across the board about the pace of the coronavirus recovery. Global airlines warned on Tuesday it would take a year longer than expected for air traffic to return to normal levels, with long-range travel hit harder than short hops.

The outbreak has crippled passenger travel and pushed major airlines to the brink of bankruptcy, resulting in many carriers deferring aircraft deliveries.

Boeing also confirmed the last 747, the iconic hump-topped jumbo jet that democratized global air travel in the 1970s but fell behind modern twin-engine aircraft, would roll out of its Seattle-area factory in around two years.

“Air travel has always proven to be resilient – and so has Boeing,” Calhoun added.

The 737 MAX grounding has cost Boeing some $20 billion, ousted executives, halted production and hobbled its supply chain, with criminal and congressional investigations and lawsuits still ongoing.

The coronavirus pandemic has exacerbated this crisis.

Boeing will now reduce 787 production to six jets a month in 2021 – a third rate drop from a year ago, when it was producing the Dreamliners at a record monthly rate of 14 planes.

Boeing also said it would again reduce the combined production rate of the 777 and 777X jets to two planes per month in 2021, while delaying the 777X’s entry into service by up to a year, as Reuters previously reported.

“We’ll have to further assess the size of our workforce,” Calhoun told employees in a memo on Wednesday.

While Calhoun said the 737 MAX certification process was proceeding well, investors on an analyst call will be waiting for any signal that Boeing would push back the already delayed timeline for resuming MAX deliveries beyond end-September. That means the jet’s U.S. return to service could slip to 2021.

“The plethora of downside risks are not fully reflected in Boeing’s current share price,” Vertical Research Partners analyst Rob Stallard said, noting that clearing an inventory of some 400 built MAX aircraft could take longer than expected.

On an adjusted basis, Boeing lost $4.79 per share, bigger than analysts’ average estimate of a loss of $2.54, according to IBES data from Refinitiv.

(Reporting by Eric M. Johnson in Seattle and Ankit Ajmera in Bengaluru; Additional reporting by David Shepardson in Washington and Tracy Rucinski in Chicago; Editing by Sriraj Kalluvila and Nick Zieminski)