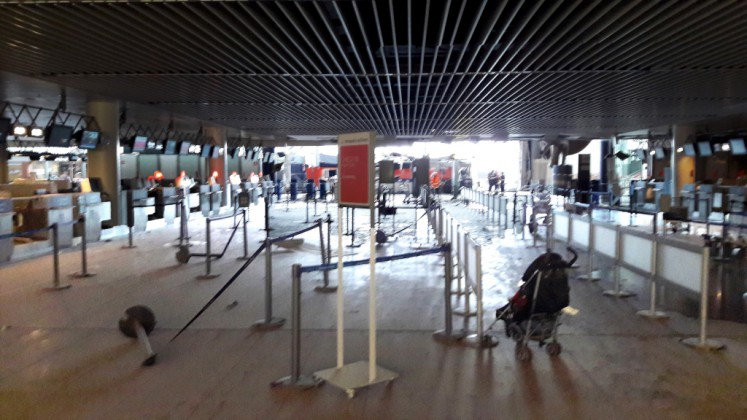 Damage is seen inside the departure terminal following the March 22, 2016 bombing at Zaventem Airport, in these undated photos made available to Reuters by the Belgian newspaper Het Nieuwsblad, in Brussels, Belgium, March 29, 2016. Het Nieuwsblad via REUTERS

Psalm 10:17-18 O Lord, you hear the desire of the afflicted; you will strengthen their heart; you will incline your ear to do justice to the fatherless and the oppressed, so that man who is of the earth may strike terror no more.

BRUSSELS (Reuters) – The militant cell behind bombings in Brussels had been plotting to hit France again after carrying out the Paris attacks in November, but was forced to strike closer to home as police closed in, Belgian prosecutors said on Sunday.

Investigations into the Islamic State attacks in Paris, which killed 130 people, showed that many of the perpetrators lived in Belgium, including surviving suspects who managed to evade police for more than four months.

“Numerous elements in the investigation have shown that the terrorist group initially had the intention to strike in France again,” Belgium’s federal prosecutor said in a statement.

“Surprised by the speed of progress in the investigation, they took the decision to strike in Brussels.”

Belgian intelligence and security forces had been criticised abroad for not doing more to dismantle the militant cell, because of its links to the Paris attacks.

As of Friday, all publicly identified suspects were either in detention or dead, but Belgium remains on its second highest threat level, and Prime Minister Charles Michel said his government would remain alert.

His comments were echoed by French Prime Minister Manuel Valls, who said France would not be lowering its guard.

“This is a further sign of the very serious threat facing Europe as a whole and of course France in particular,” Valls told a news conference in Algiers.

Abdeslam, born and raised in Belgium to Moroccan-born parents, told a magistrate he had planned to blow himself up at a sports stadium in Paris in November, but backed out at the last minute. His brother Brahim blew himself up at a Paris cafe.

Another man linked to the Paris attacks, Mohamed Abrini, was arrested in Brussels on Friday and admitted to being the “man in the hat” captured on video walking into Brussels airport alongside two suicide bombers.

Abrini, 31, has been charged with terrorist murders, prosecutors said.

Another main suspect who was seen alongside the suicide bomber in the Brussels metro, identified by prosecutors as Osama K, was also arrested on Friday in the Belgian capital.