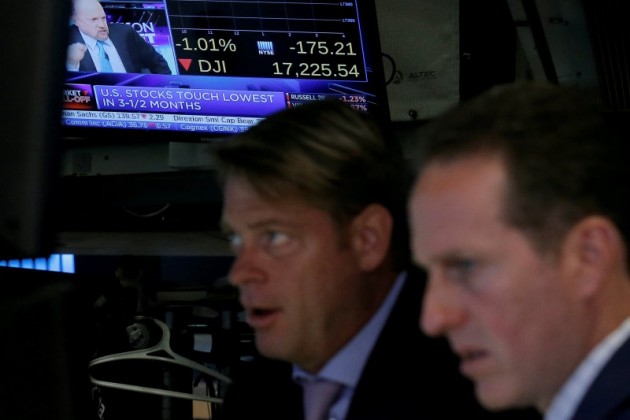 (Reuters) – U.S. bank stocks led a steep decline on Wall Street on Monday as aftershocks from Britain’s vote to leave the European Union roiled global markets for a second day.

The S&amp;P financial index was down nearly 3 percent by late morning, with investors increasingly worrying about London’s future as the region’s finance capital.

JPMorgan fell 3.7 percent, while Bank of America dropped 5.4 percent. The stocks were among the biggest drags on the S&amp;P 500.

The Dow has now lost nearly 950 points since the “Brexit” vote outcome, setting it up for the worst two-day decline since August 2015.

European stocks were hammered yet again and the sterling fell more than 2 percent. The European banks index on Monday hit its lowest since July 2012.

“What I can say with certainty is uncertainty will remain,” said Tina Byles Williams, chief executive officer of FIS Group.

The selloff on Friday eroded $2.08 trillion in market capitalization globally – the biggest one-day loss ever, according to Standard Poor’s Dow Jones Indices, trumping the Lehman Brothers bankruptcy during the 2008 financial crisis.

U.S. Treasury Secretary Jack Lew, however, said the market impact from Brexit had been orderly so far and there were no signs of a financial crisis arising from the vote.

Eight of the 10 major S&amp;P sectors were lower. Utilities and telecom service were the only ones in the black.

The Brexit vote, which Federal Reserve Chair Janet Yellen had said would have significant repercussions on the U.S. economic outlook, is expected to scuttle the Fed’s ability to raise short-term interest rates.

Traders have virtually priced out an interest rate increase this year, according to CME Group’s FedWatch tool.