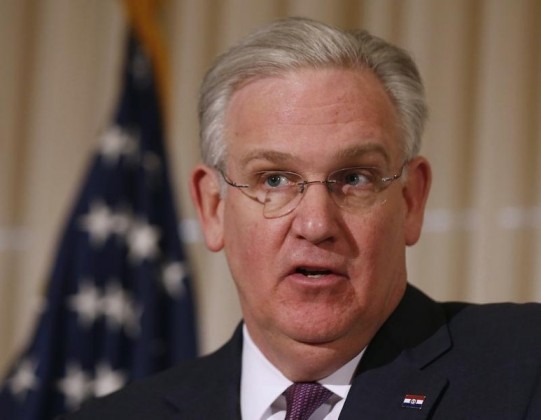 Missouri Governor Jay Nixon speaks at the public launch of the U.S. Agriculture Coalition for Cuba while at the National Press Club in Washington, January 8, 2015. REUTERS/Larry Downing

(Reuters) – Missouri Governor Jay Nixon vetoed a bill on Monday that would eliminate the need for a permit, training and background checks for persons who want to carry a concealed weapon in the state.

The Republican-led bill passed the Missouri House and Senate this spring with enough votes to override the veto when lawmakers convene in September. Two-thirds majority is required.

In a news release accompanying his veto message, Nixon, a Democrat, said he has supported prior legislation to expand concealed carry laws during his seven years in office.

“But I cannot support the extreme step of throwing out that process entirely, eliminating sensible protections like background checks and training requirements, and taking away the ability of sheriffs to protect their communities,” Nixon said.

Debate over gun control in the United States has increased after a gunman pledging allegiance to the Islamic State militant group killed 49 people at Orlando’s Pulse nightclub on June 12 in the deadliest mass shooting in modern U.S. history.

Nixon, who cannot seek re-election this year due to term limits, said the law would allow people with criminal records, such as misdemeanor assault and drug possession, to automatically carry a concealed weapon.

Lawmakers and other supporters of the bill have said the law is an important step forward in gun rights and will not make the state less safe.

“Every time we change the concealed carry law people say there will be blood in the streets,’ said Kevin Jamison, a lawyer who is president of the Western Missouri Shooters Alliance, which lobbied for the bill. “There is never blood in the streets.”

The new law would also expand the so-called “stand your ground” law to allow persons to use deadly force not only in their homes but in other places if they feel threatened. They would have no duty to retreat to safety under the bill.