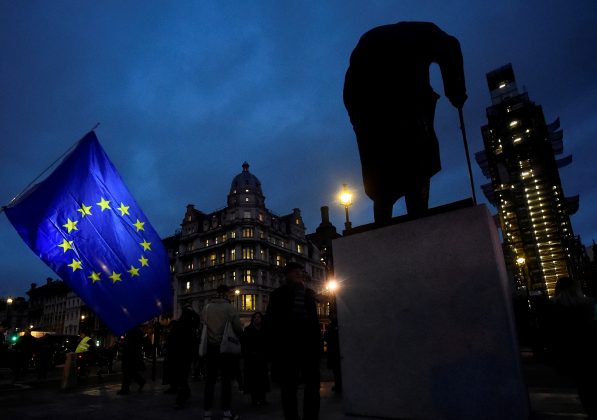 FILE PHOTO: An EU flag flutters next to the statue of Winston Churchill outside the Houses of Parliament, ahead of a vote on Prime Minister Theresa May's Brexit deal, in London, Britain January 15, 2019. REUTERS/Clodagh Kilcoyne

By Guy Faulconbridge and Andrew MacAskill

LONDON (Reuters) – With just 10 weeks until the United Kingdom is due to leave the European Union, it is unclear how or even whether the divorce will take place.

The crushing defeat of Prime Minister Theresa May’s deal means she must now work with other parties in parliament on a new variant if she is to avoid a no-deal Brexit or the other option, a referendum on membership.

As the clock ticks down to 2300 GMT on March 29, the time and date set in law for Brexit, May has three main options: a compromise deal, a no-deal Brexit or halting Brexit altogether.

After her defeat, May pledged to speak to senior to parliamentarians to find a compromise, and financial markets are betting that lawmakers will cobble together a last-minute deal.

The opposition Labour Party’s finance policy spokesman, John McDonnell, said Labour would support May if she agreed to stay in a permanent customs union with the EU, a close relationship with its single market and greater protections for workers and consumers.

With May’s Conservatives deeply split, the opposition party holds great influence over the eventual outcome of Brexit. It is difficult to see how any Brexit plan can pass the House of Commons without the support of some of Labour’s 256 lawmakers.

But if May moves closer to Labour’s position, she risks losing the support of dozens of pro-Brexit Conservative lawmakers as well as the small Northern Irish party which props up her minority government.

If May is unable to forge a compromise deal, she will have to chose between calling a national election, delaying Brexit or going for a no-deal exit.

Many Conservative lawmakers would oppose fighting a national election at such a crucial juncture, especially after she lost the party its majority in a snap poll in 2017. May herself said on Wednesday an election would be “the worst thing we could do”.

EU chief negotiator Michel Barnier indicated that one way forward would be for Britain to accept closer alignment with EU regulations. EU officials say London could, for example, abandon its plan to leave the EU customs union and single market, but that is unlikely to win backing among many Conservatives.

Despite strong opposition among a majority of British lawmakers and many businesses to leaving the EU without a deal, this remains the default option unless parliament can agree on a Brexit plan.

“It is not enough to just not like May’s deal – to not have a no-deal there has to be something to replace it with, otherwise we leave without a deal,” said one senior British lawmaker.

No-deal means there would be no transition so the exit would be abrupt, the nightmare scenario for international businesses and the dream of hard Brexiteers who want a decisive split.

Britain is a member of the World Trade Organization so tariffs and other terms governing its trade with the EU would be set under WTO rules.

Business leaders are triggering contingency plans to cope with additional checks on the post-Brexit UK-EU border they fear will clog ports, silt up the arteries of trade and dislocate supply chains in Europe and beyond.

Brexit supporters say there would be short-term disruption but in the long-term the UK would thrive if cut free from what they cast as a doomed experiment in German-dominated unity that is falling behind China and the United States.

Since the 2016 referendum, opponents of Brexit have sought another vote they hope would overturn the result, but May has repeatedly ruled this out, saying it would undermine faith in democracy among the 17.4 million who voted in 2016 to leave.

A new referendum can only be called if it is approved by parliament and there is currently no majority in favor of one.

The opposition Labour Party wants to push for an election and only if that is rejected will it consider another referendum. Labour leader Jeremy Corbyn is a veteran euroskeptic who has also spoken out in the past against a second referendum.

If parliament agreed to a second referendum, Britain would have to ask for an extension to its timetable for leaving the EU to allow enough time for a campaign, probably by withdrawing its Article 50 formal departure notification.

The Electoral Commission would have to agree what question, or questions, would be asked of the public.

At the highest levels of government, there are worries that a second referendum would exacerbate the deep divisions exposed by the 2016 referendum, alienate millions of pro-Brexit voters and stoke support for the far-right. If Britons voted to remain, Brexit supporters might then demand a third and decisive vote.

“I became prime minister immediately after that (2016) referendum,” May said minutes after her Brexit deal was rejected on Tuesday.&nbsp;”I believe it is my duty to deliver on their instruction and I intend to do so.”