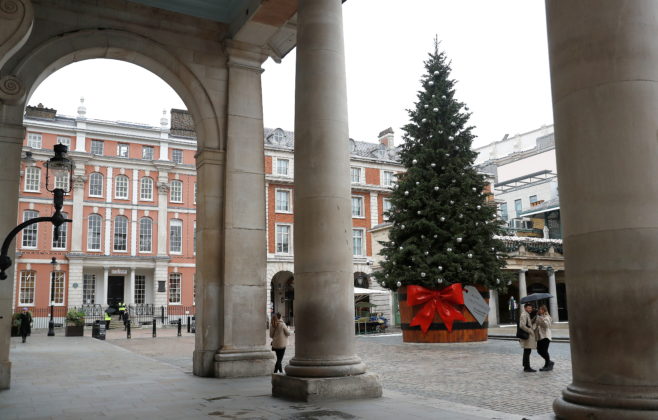 A Christmas tree is seen in Covent Garden amid the coronavirus disease (COVID-19) outbreak in London, Britain, November 20, 2020. REUTERS/Peter Nicholls

LONDON (Reuters) – Britain could ease stringent COVID-19 rules to allow families to gather for Christmas as signs indicate that coronavirus cases are starting to flatten as a result of current lockdowns, Health Secretary Matt Hancock said on Friday.

The United Kingdom has the worst official COVID-19 death toll in Europe and Prime Minister Boris Johnson has imposed some of the most stringent curbs in peacetime history in an attempt to halt the spread of the coronavirus.

But heading into the holiday season, the government faces a dilemma – to ease restrictions, with the risk of renewed spread of the disease and death, or to ban large get-togethers.

“It of course won’t be like a normal Christmas, there will have to be rules in place,” Hancock told Sky News.

He said he hoped that restrictions, which include a strict lockdown in England, could be eased to “allow for a bit more of that normal Christmas that people really look forward to”.

Hancock said he was working with the devolved administrations in Scotland, Wales and Northern Ireland – which manage their own policies on combating the pandemic – for a UK-wide approach to rules for Christmas.

The head of London’s Metropolitan Police, Cressida Dick, said that while police might try to stop wild parties, there were better uses of police time than trying to catch families out.

“Let’s see what the rules are, but I have no interest in interrupting family Christmas dinners,” she told LBC radio.

There was some sign that infection numbers were flattening. The Office for National Statistics said incidence had levelled off in recent weeks, with daily infections increasing by 38,900 in England in the latest week, down from around 50,000 previously.

The government also reduced their estimate of the reproduction “R” number, and said the daily growth rate had fallen to between 0% and 2%.

England has been under lockdown for two weeks. It is due to end on Dec. 2, although ministers have not ruled out that it could be extended.

Scotland’s biggest city Glasgow and parts of the nation’s west and central regions begin a stricter lockdown regime on Friday to last until Dec. 11, including the closure of pubs and restaurants and non-essential shops.