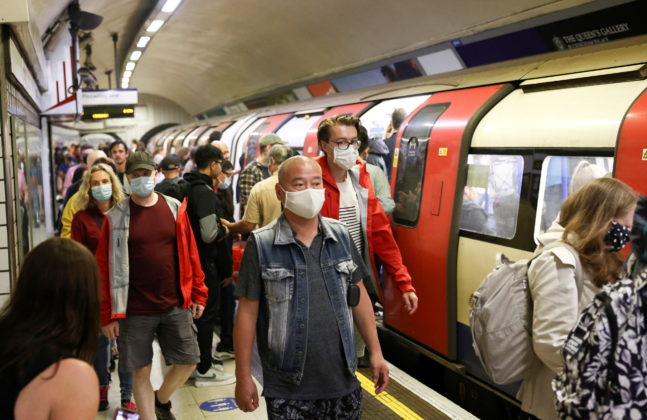 By Alistair Smout and Paul Sandle

LONDON (Reuters) -Britain reported its highest number of deaths and people in hospital with coronavirus since March on Tuesday, with Prime Minister Boris Johnson urging caution despite a week of lower reported numbers of infection.

The number of COVID-19 patients in British hospitals has also steadily risen to 5,918, also the highest since March, following a spike in cases earlier this month.

The number of new infections has fallen each day for the last seven days, though Johnson stressed the pandemic was not over.

“It is very, very important that we don’t allow ourselves to run away with premature conclusions about (lower case numbers),” Johnson told broadcasters, noting it would take a while for the lifting of restrictions in England to feed through to the data.

“People have got to remain very cautious and that remains the approach of the government.”

Johnson has lifted restrictions in England and is betting he can get one of Europe’s largest economies firing again because so many people are now vaccinated, a decision which marks a new chapter in the response to the novel coronavirus.

Imperial College epidemiologist Neil Ferguson said the effective end of Britain’s pandemic could be just months away as vaccines have so dramatically reduced the risk of hospitalization and death.

“We’re not completely out of the woods but the equation has fundamentally changed,” Ferguson, whose modelling of the virus’s likely spread at the outset of the pandemic in early 2020 alarmed governments across the world, told the BBC.

“I’m positive that by late September, October time we will be looking back at most of the pandemic.”

ON THE WAY DOWN

Johnson lifted COVID-19 restrictions in England on July 19. New daily cases in the current wave peaked two days earlier at 54,674 and have since fallen dramatically, to 23,511 new cases on Tuesday.

The closure of schools for summer, the end of the Euro 2020 soccer championships and warmer weather are among factors epidemiologists say might have reduced social mixing indoors and therefore cases, even as England’s economy has fully reopened.

Case numbers have been falling for longer in Scotland, where the recent peak in new infections was on July 1, than in England, corresponding to an earlier elimination from the Euros.

“Both of them seem to coincide in some ways with the end of activity in the Euro 2020 tournament,” Rowland Kao, an epidemiologist at the University of Edinburgh, told Reuters, adding that changes in testing patterns might mean that the sharpness of the drop is overstated in daily testing figures.

“(Cases) may go up again, because we’re only just going to be starting to see the effect of the complete release of restrictions associated with July 19 in England. So there may still be rises yet to come.”

Britain has one of the highest official fatality rates from COVID-19 in the world, with 129,303 deaths, but vaccinations and lockdowns have greatly slowed the rate since March.

Scotland’s National Clinical Director Jason Leitch said a gradual return to usual social activity would help smooth the end of the current wave, but that the next few weeks would be unpredictable.

“On the way down is always bumpier than the exponential rise on the way up,” he told Reuters.