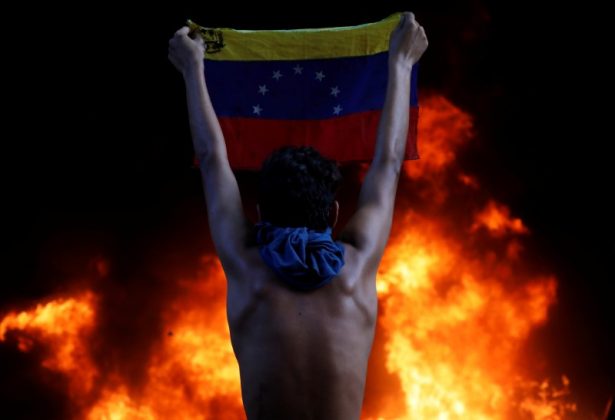 FILE PHOTO - A protester holds a national flag as a bank branch, housed in the magistracy of the Supreme Court of Justice, burns during a rally against Venezuela's President Nicolas Maduro, in Caracas, Venezuela June 12, 2017. REUTERS/Carlos Garcia Rawlins

By Diego Oré and Andreína Aponte

CARACAS (Reuters) – Venezuelan legislators and opposition leaders on Thursday staged protests against President Nicolas Maduro aboard buses and trains in Caracas in an effort to bypass blockades of street demonstrations by security forces.

Maduro’s adversaries have for more than two months been holding marches and rallies that are routinely cut short by troops and police, resulting in clashes that have left at least 71 people dead.

“Our message is going to travel all the stations of the subway,” said opposition deputy Juan Mejia before boarding a Caracas subway train.

“Our message will reach all those Venezuelans who have expressed a desire for a different country, but who have to go out and get their daily bread to help their family.”

Mejia said that employees of the capital’s subway, which has for years been closely controlled by the ruling Socialist Party, made announcements over loudspeakers warning of delays due to “a group of opposition sympathizers.”

Maduro’s critics say he is seeking to forge dictatorship through a legislative superbody known as a constituent assembly to be elected on July 30 in a vote opposition leaders say is rigged in favor of the Socialists.

Maduro, who was elected after the death of his mentor Hugo Chavez in 2013, says the protests are an effort to overthrow him and blames the opposition for scores of deaths. He says the constituent assembly will help the country escape a crippling economic crisis.

Authorities confirmed two more student deaths at protests on Thursday. Luis Vera, 20, was crushed by a car in the oil region of Zulia, while Jose Gregorio Perez was hit in the face in the mountain state of Tachira, the public prosecutor’s office said.

Another group of deputies boarded city buses that run through Caracas and nearby cities and explained to passersby their view that the constituent assembly “formalizes the dictatorship.”

Activists also organized a 6 a.m. visit to the National Electoral Council, which the opposition accuses of favoring Maduro’s government, to put up posters with messages such as “CNE accomplice of the dictatorship.”

It was the first time during the current wave of demonstrations that protesters were able to reach the institution. Previous marches to the headquarters were blocked by security forces.

U.S. Vice President Mike Pence held up Venezuela on Thursday as a prime example of what happens when democracy is undermined and urged Latin American leaders to condemn its government, comments Maduro described as nauseating.