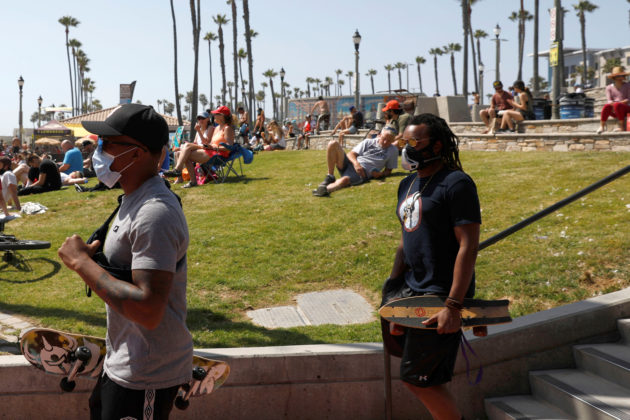 FILE PHOTO: Skateboarders wear face masks as others sit at the beach on Memorial Day weekend during the outbreak of the coronavirus disease (COVID-19) in Huntington Beach, California, U.S., May 23, 2020. REUTERS/Patrick T. Fallon/File Photo

LOS ANGELES (Reuters) – California on Thursday ordered residents to wear masks at nearly all times outside the home, saying the strict new rule was necessary because too many Californians were neglecting to cover their faces during the coronavirus pandemic.

The mandate is one of the broadest of any U.S. state, requiring Californians to wear masks any time they leave the home, with exceptions made for people eating and drinking in restaurants or exercising outdoors, as long as they maintain 6 feet of physical distance.

“Simply put, we are seeing too many people with faces uncovered, putting at risk the real progress we have made in fighting the disease,” Governor Gavin Newsom said in a stern statement announcing the new directive.

“California’s strategy to restart the economy and get people back to work will only be successful if people act safely and follow health recommendations. That means wearing a face covering, washing your hands and practicing physical distancing,” Newsom said.

The statement left unclear how the state intended to enforce the order, which recommends face coverings even for people driving alone in their cars. Representatives for the California Department of Public Health could not be reached for comment.

About a dozen other U.S. states and some major cities have face-covering rules, although most apply in situations where social distancing isn’t possible or to shared indoor spaces such as stores and public transportation.

Most states have more limited mask guidelines. Montana, South Dakota, Wisconsin and South Carolina have none.

California, the most populous U.S. state with 40 million residents, was the first state to impose sweeping statewide clampdowns on residents and mandatory business closures, on March 19.

Since then California, like most states, has slowly eased those rules to reopen its damaged economy, although some restrictions remain in place.