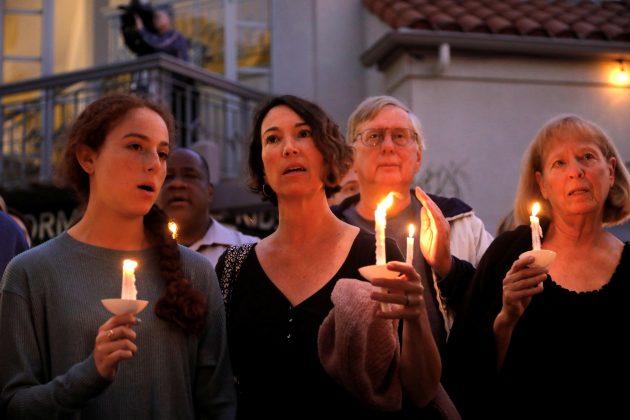 A candlelight vigil is held at Rancho Bernardo Community Presbyterian Church for victims of a shooting incident at the Congregation Chabad synagogue in Poway, north of San Diego, California, U.S. April 27, 2019. REUTERS/John Gastaldo

By Joseph Ax and Alex Dobuzinskis

(Reuters) – The woman who was killed in a deadly shooting at a Southern California synagogue will be buried on Monday after being hailed as a hero, as police continue to investigate the motive of the 19-year-old suspect.

Lori Gilbert Kaye, 60, had attended services at Chabad of Poway in suburban San Diego on Saturday, the last day of the weeklong Jewish holiday of Passover, to honor her recently deceased mother. Her daughter, Hannah, and her husband, Howard, were with her.

She was one of four people shot, and the only one killed, when a gunman stormed in with an assault-style rifle, six months to the day after 11 worshippers were killed at a Pittsburgh synagogue in the deadliest attack on American Jewry. Police are investigating the incident as a hate crime.

Rabbi Yisroel Goldstein, who was shot in both hands during the attack and lost a finger, described seeing Kaye’s lifeless body on the floor, as her husband tried to resuscitate her before fainting.

“It’s the most heart-wrenching sight I could have seen,” Goldstein told reporters on Sunday. “Lori took the bullet for all of us … She died to protect all of us.”

The gunman, identified by police as John Earnest, fled after his weapon jammed and eventually called police in order to surrender.

Earnest, who is being held without bail, appears to have authored an online manifesto in which he claimed to have set a nearby mosque on fire last month and drawn inspiration from mass shooting at two mosques in New Zealand that killed 50 people in March.

Local and federal authorities also are examining Earnest’s possible involvement in the March 24 pre-dawn arson fire at the Islamic Center of Escondido, about 15 miles (24 km) north of Poway, Gore said.

Kaye, one of the synagogue’s founding members more than three decades ago, was a deeply caring member of the community, her friends said. When one congregant developed breast cancer, Kaye drove her to every appointment and helped take care of her children, Goldstein said.

“She is a person of unconditional love,” Goldstein said.

In a Facebook post, a friend, Audrey Jacobs, called her a “woman of valor” whose final act was to protect others.

“You were always running to do a mitzvah (good deed) and gave tzedaka (charity) to everyone,” she wrote.

Another close friend, Roneet Lev, said on CNN that Kaye’s life was defined by giving, whether money to charities, greeting cards to friends or a bagel and coffee to a homeless person.

“She is the symbol of random acts of kindness,” Lev said on CNN. “She’s had ups and downs in her life like all of us, but no matter what, in her darkest days – and she’s had trauma in her life – she always, always looked at the positive.”

Her funeral will take place at the synagogue on Monday afternoon.

Earnest is scheduled to appear in a San Diego court on Wednesday. Authorities believe he acted alone.

The other two wounded victims were Noya Dahan, 9, and her uncle, Almog Peretz, 34, both Israeli citizens. They were released from the hospital after getting hit by shrapnel.

Dahan’s family moved to the United States in search of a safer life after their home was repeatedly shelled by Palestinian rockets.

At a vigil on Sunday, Dahan rode on her father’s shoulders, wrapped in an Israeli flag, as people cheered.

(Reporting by Joseph Ax in New York, and Alex Dobuzinskis in Los Angeles; Editing by Scott Malone and Bill Trott)