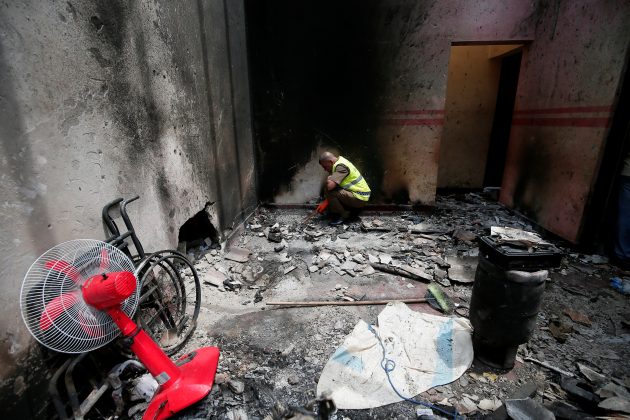 A police officer inspects the site of a gun battle between troops and suspected Islamist militants, on the east coast of Sri Lanka, in Kalmunai, April 28, 2019. REUTERS/Dinuka Liyanawatte

By Alasdair Pal and Shri Navaratnam

KALMUNAI/COLOMBO (Reuters) – The father and two brothers of the suspected mastermind of Sri Lanka’s Easter Sunday bombings were killed when security forces stormed their safe house on the east coast two days ago, police and a relative said on Sunday.

Zainee Hashim, Rilwan Hashim and their father Mohamed Hashim, who appear in a video circulating on social media calling for all-out war against non-believers, were among at least 15 killed in a fierce gun battle with the military on the east coast on Friday.

Kamal Jayanathdhi, the officer in charge at Kalmunai police station on the east coast, confirmed the three men had died along with a child that appears in the video, and that the undated clip in which they discuss martyrdom, had been shot in the same house where the gun battle took place.

Two people who were inside the house, a woman and a seven-year-old girl believed to be relatives of the men, survived, he said, while a woman was killed in crossfire on a nearby street.

Niyaz Sharif, the brother-in-law of Zahran Hashim, the suspected ringleader of the wave of Easter Sunday bombings that killed over 250 people in churches and hotels across the island nation, told Reuters the video showed Zahran’s two brothers and father.

Sri Lanka has been on high alert since the attacks on Easter Sunday, with nearly 10,000 soldiers deployed across the island to carry out searches and hunt down members of two local Islamist groups believed to have carried out the attack.

Authorities have detained more than 100 people, including foreigners from Syria and Egypt since the April 21 bombings.

On Sunday police in the eastern town of Kattankudy raided a mosque founded by Zahran which doubled up as the headquarters of his group, the National Thawheedh Jamaath (NTJ).

In the video, Rilwan Hashim is seen calling for ‘jihad’ or holy war, while children cry in the background.

“We will destroy these non-believers to protect this land and therefore we need to do jihad,” Rilwan says in the video, sitting beside his brother and father.

“We need to teach a proper lesson for these non-believers who have been destroying Muslims.”

Rilwan, who has a damaged eye and badly disfigured hand in the video, had recently been injured while making a bomb, Jayanathdhi said.

On Sunday, when Reuters visited the house, police were sifting through the wreckage, taking fingerprints and video footage.

Watermelon rinds and a box of dates were still on the kitchen counter, while four pairs of children’s flip-flops were by the front door.

But in the main room, where the three men filmed the video, a huge crater had punched a hole in the concrete floor, while bloodstains covered the wall.

Two men had moved into the three-room rented house in the Sainthamaruthu area of Kalmunai, days before the Easter Sunday attacks, police and locals said. After more people arrived, locals grew suspicious, said Mohammed Majid, the secretary of the Grand Masjid Sainthamaruthu, one of the town’s main mosques.

After evening prayers on Friday, a group of men from the local Hijra Mosque came to the house to question the occupants.

When one man brandished an assault rifle, the men fled, alerting police who arrived shortly afterward. One man was killed after running into the street with a gun to confront police, while a series of explosions came from the house, eyewitnesses said.

Authorities suspect there may be more suicide bombers on the loose. Defense authorities have so far focused their investigations on international links to two domestic groups they believe carried out the attacks, the National Thawheedh Jamaath and Jammiyathul Millathu Ibrahim.

At a nearby house where police seized more explosives and a flag of the Islamic State on Friday, locals said they feared more violence.

“People were coming and going but we didn&rsquo;t know their names,” said Juneedha Hasanar, who runs a shop at the bottom of the street, yards from the house. “Now we are afraid.”

Islamic State has claimed responsibility for the Easter bombings, and on Sunday the group said three of its members clashed with Sri Lankan police for several hours in Friday’s gun battle on the east coast before detonating their explosive vests, the militant group’s news agency Amaq said.

Police have said six children were among the other 12 people who died in the gun battle, and on Sunday recovered the partial remains of a child no more than a few months old.