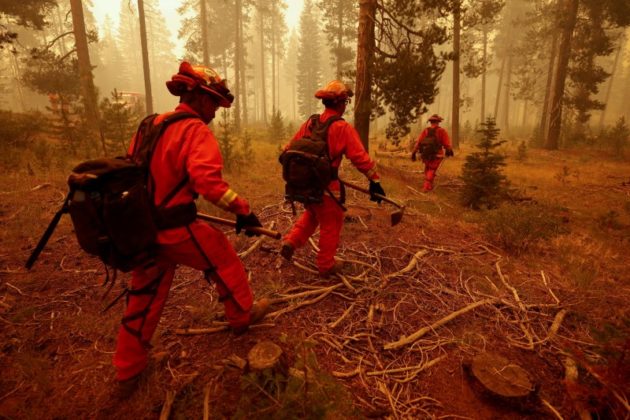 FILE PHOTO: Members of the California Department of Corrections and Rehabilitation Vallecito Fire Crew move into the forest to put out a spot fire to slow the spread of the Dixie Fire, a wildfire near the town of Westwood, California, U.S. August 8, 2021. REUTERS/Fred Greaves/File Photo

The Dixie Fire, burning northeast of San Francisco, had grown to 489,287 acres or 764.5 square miles (1,980 square kilometers) from about 274,000 acres in the middle of last week, the California Department of Forestry and Fire Protection said on Twitter.

The blaze has been active for 26 days and is 21% contained, the department said. The burned area is about the size of Cancun in Mexico, and larger than the city of Houston in Texas.

Fire activity intensified on Sunday amid low relative humidity and strong southwest winds in the West Zone, and warm temperatures and low humidity in the East Zone, the department said, adding it has spread across four counties.

More than 5,000 firefighters are currently tackling the Dixie Fire.

“We’re seeing fire activity that even veteran firefighters haven’t seen in their career,” Edwin Zuniga, a spokesman for the California Department of Forestry and Fire Protection, told the Washington Post.

Only the August Complex Fire of 2020 in California, which consumed more than 1 million acres, was bigger.

Thus far, no deaths have been attributed to the wildfire. However, the blaze has damaged 42 residential, commercial and other structures and destroyed 627 such structures, according to the California Department of Forestry and Fire Protection.

The Plumas County Sheriff’s Office (PCSO) issued new evacuation orders on Sunday afternoon after the spread of the Dixie Fire.

California typically experiences peak fire season later in the year. The state was on pace to suffer even more burnt acreage this year than last year, which was the worst fire season on record.

The cause of the fire remains under investigation. Pacific Gas & Electric has said it may have started when a tree fell on one of the utility’s power lines.

A federal judge late on Friday ordered Pacific Gas & Electric to explain the utility company’s role in starting the fire. U.S. District Judge William Alsup said PG&E would have until Aug. 16 to respond.

“PG&E’s responses will not be deemed as an admission by PG&E that it caused any fire, but they will serve as a starting point for discussion,” the judge said.

PG&E told the Washington Post daily that it “will respond by the deadline.”

(Reporting by Kanishka Singh in Bengaluru; Editing by Bernadette Baum)