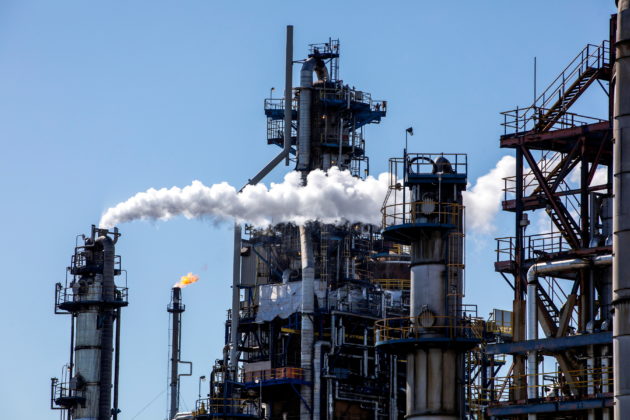 By Nia Williams and David Ljunggren

CALGARY, Alberta (Reuters) -A day before Michigan’s deadline to close down a key crude oil pipeline, Canada on Tuesday issued its strongest remarks so far about the move, warning that it could undermine relations with the United States, its closest ally and trading partner.

Canadian company Enbridge Inc is preparing for a legal battle with Michigan and courting protests from environmental groups, betting it can ignore the state’s Wednesday deadline to shut down Line 5, which runs under the Straits of Mackinac.

The Canadian government, intervening in the case to back Enbridge, said in a U.S. federal court filing that Michigan had no right to act unilaterally since a 1977 Canada-U.S. pipeline treaty guarantees the free flow of oil between the two nations.

“This case raises concerns regarding the efficacy of the historic framework upon which the U.S.-Canada relationship has been successfully managed for generations,” Ottawa said.

The brief said Canada would suffer “massive and

Canada has been lobbying Washington officials to keep the pipeline open in what is likely to be an election year in Canada. The White House has so far kept quiet.

“We don’t weigh in on that … it will be decided in court,” U.S. Secretary of Energy Jennifer Granholm told reporters on Tuesday when asked about the White House’s position on Line 5.

In November, Michigan Governor Gretchen Whitmer gave Enbridge six months to shut down the pipeline that runs four miles (6.4 km) along the bottom of Lake Michigan-Huron, citing fears it could rupture.

The order needs a confirmatory order from a judge to enforce it, and Enbridge and Michigan are disputing whether the issue should be heard in state or U.S. federal court.

The sides are in court-ordered mediation, with the next session scheduled for May 18.

“We will not stop operating the pipeline unless we are ordered by a court or our regulator, which we view as highly unlikely,” Enbridge spokeswoman Tracie Kenyon said in a statement this week.

Joe Comartin, Canada’s consul general in Detroit who is arguing on behalf of Ottawa, said litigation could drag on until at least 2024.

“I don’t see a court jumping the gun and ordering it closed … until the litigation and constitutional issues are resolved,” he said by phone.

Ontario estimates the city of Sarnia, across the border from Michigan, could lose 5,000 refinery and chemical plant jobs. Industry lobbyists say thousands of U.S. jobs are in danger.

Michigan is reviewing what it could do if Enbridge ignores the order, said a spokeswoman for the Michigan Attorney General.

Canadian crude market forward prices suggest most traders do not expect a shutdown in coming months, but the uncertainty is concerning, said one Calgary-based market source.