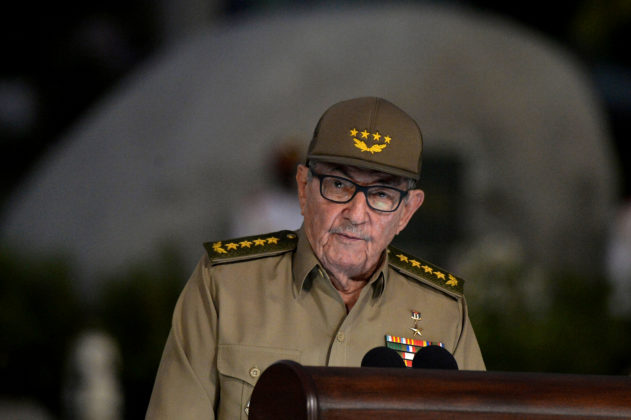 By Sarah Marsh and Nelson Acosta

HAVANA (Reuters) -Raul Castro confirmed he was handing over the leadership of the all-powerful Cuban Communist Party to a younger generation at its congress that kicked off on Friday, ending six decades of rule by himself and older brother Fidel.

In a speech opening the four-day event, Castro, 89, said the new leadership were party loyalists with decades of experience working their way up the ranks and were “full of passion and anti-imperialist spirit”.

Castro had said at the last party congress in 2016 it would be the last one led by the “historic generation” who fought in the Sierra Maestra to topple a U.S.-backed dictator in a 1959 leftist revolution. He already handed over the presidency to protégé Miguel Diaz-Canel, 60, in 2018.

The congress is the party’s most important meeting, held every five years to review policy and fix leadership.

“I believe fervently in the strength and exemplary nature and comprehension of my compatriots, and as long as I live I will be ready with my foot in the stirrups to defend the fatherland, the revolution and socialism,” Castro told hundreds of party delegates gathered at a convention center in Havana.

The congress is a closed-door event but excerpts are being broadcast on state television.

Castro hailed Diaz-Canel as one of the new generation of leaders, praising the “good results” he had achieved in his three years in office.

Castro’s olive green military fatigues contrasted with the civil get-up of his protégé who is widely expected to succeed him as party first secretary, the most powerful position in Cuba’s one-party system.

Cuba’s new leaders face the worst economic crisis since the collapse of former benefactor the Soviet Union, and there are signs of growing frustration, especially among younger Cubans.

A tightening of the decades-old U.S. trade embargo and the coronavirus pandemic have exacerbated a liquidity crisis in the ailing centrally planned economy, which was already struggling following a decline in Venezuelan aid.

That has led to shortages of even basic goods, with many Cubans spending hours lining up to buy groceries.

U.S. President Joe Biden, who took office in January, has vowed to roll back some of Trump’s sanctions, although the White House said on Friday a shift in Cuba policy was not among his top foreign policy priorities.

Castro said Cuba was ready for a new relationship.

“I ratify from this party congress the will to develop a respectful dialogue and edify a new type of relationship with the United States without, in order to achieve it, Cuba having to renounce the principles of the revolution and socialism,” he said.