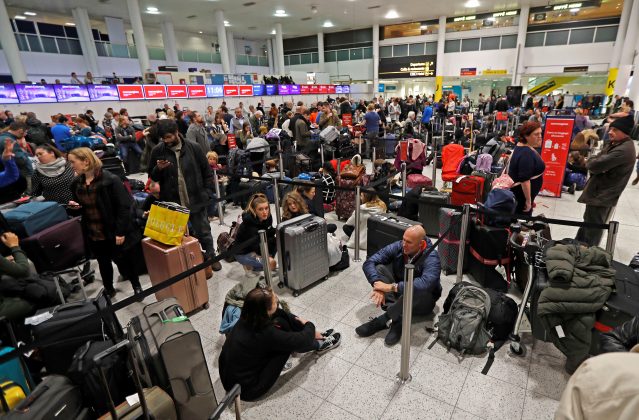 FILE PHOTO: Passengers wait around in the South Terminal building at Gatwick Airport after drones flying illegally over the airfield forced the closure of the airport, in Gatwick, Britain, December 20, 2018. REUTERS/Peter Nicholls

As of 11am ct, on Friday, the airport has once again been reported to have shut down only 11 hours after resuming flights due to a report of another drone in the area. The airport will continue to cancel flights until the report has been confirmed.

LONDON (Reuters) – A mystery drone operator’s success in shutting down Britain’s second busiest airport for more than 36 hours has exposed the vulnerability of others across the world to saboteurs armed with such cheap and easily available devices.

The incursion at London Gatwick, a brazen game of cat and mouse that those responsible played with Europe’s top military power, underlined how many airports lack the means to catch drone pilots quickly, let alone destroy the unmanned aerial vehicles themselves.

Advances in technology mean drones can be controlled from far away using cameras on board, or even programmed to navigate their own way to targets, and back again.

“There is no silver bullet technology,” said Geoff Moore, business development manager at UK-based Blighter Surveillance Systems, which supplies the U.S. military with anti-drone technology he said was used in Afghanistan, Syria, and Iraq.

“Drone technology is evolving quickly, the levels of autonomy are increasing, the ease of flight is increasing to the point where they can be almost ‘fire and forget’ one-button launchable.”

The nightmare at Gatwick, which stranded more than 100,000 people when all flights were grounded, was finally brought under control on Friday after the government ordered the army to use military equipment to protect the site.

Moore said radar systems used by air traffic control were designed to spot commercial aircraft rather than something as small and as close to the ground as a drone. To detect them, airports need specialist radar reinforced by thermal imaging technology. “There are no specific regulations or guidelines on UK airports that mandate that they have to deploy drone detection systems,” he said.

After detecting the drone, it needs to be disabled by interfering with its navigation system or by simply shooting it down. Authorities at Gatwick were reluctant to use guns because of the danger posed by stray bullets at a crowded airport.

And it is not enough to jam some radio frequencies because modern drones were not always radio-controlled like old-fashioned model aircraft.

Richard Gill, founder and chief executive of Drone Defence, said the fact that the drones at Gatwick were not disabled more quickly indicates that they were not relying on a radio link.

Gill said the technology that allowed a drone to be pre-programmed so that it navigates to a point or a number of points and then returns to base to recharge, could be bought from online.

“A motivated individual could potentially carry out this act,” he said. “But it is very sophisticated, it is pre-planned, it is very deliberate what they have done to cause the maximum disruption at a really busy airport in the UK.”

Jamming tactics can be risky in an airport where there are other critical communications systems.

Defense systems cannot simply block radio frequencies used to control drones, or GPS signals that the devices use to navigate, because of regulations, Moore said.

“The problem with the UK is there are some regulatory requirements around the use of things like radio frequency jamming – it’s illegal to do that,” he said. “There’s not so many mitigation technologies available in the UK because mostly they are restricted or unavailable.”

ADS, a trade group representing the aerospace, defense and security sectors, said it had asked the government to strengthen police powers, as well as the ability of airport operators and others to deploy electronic counter-measures.

But at Gatwick, the perpetrators were still at large on Friday after the most advanced drone attack yet on a major airport.