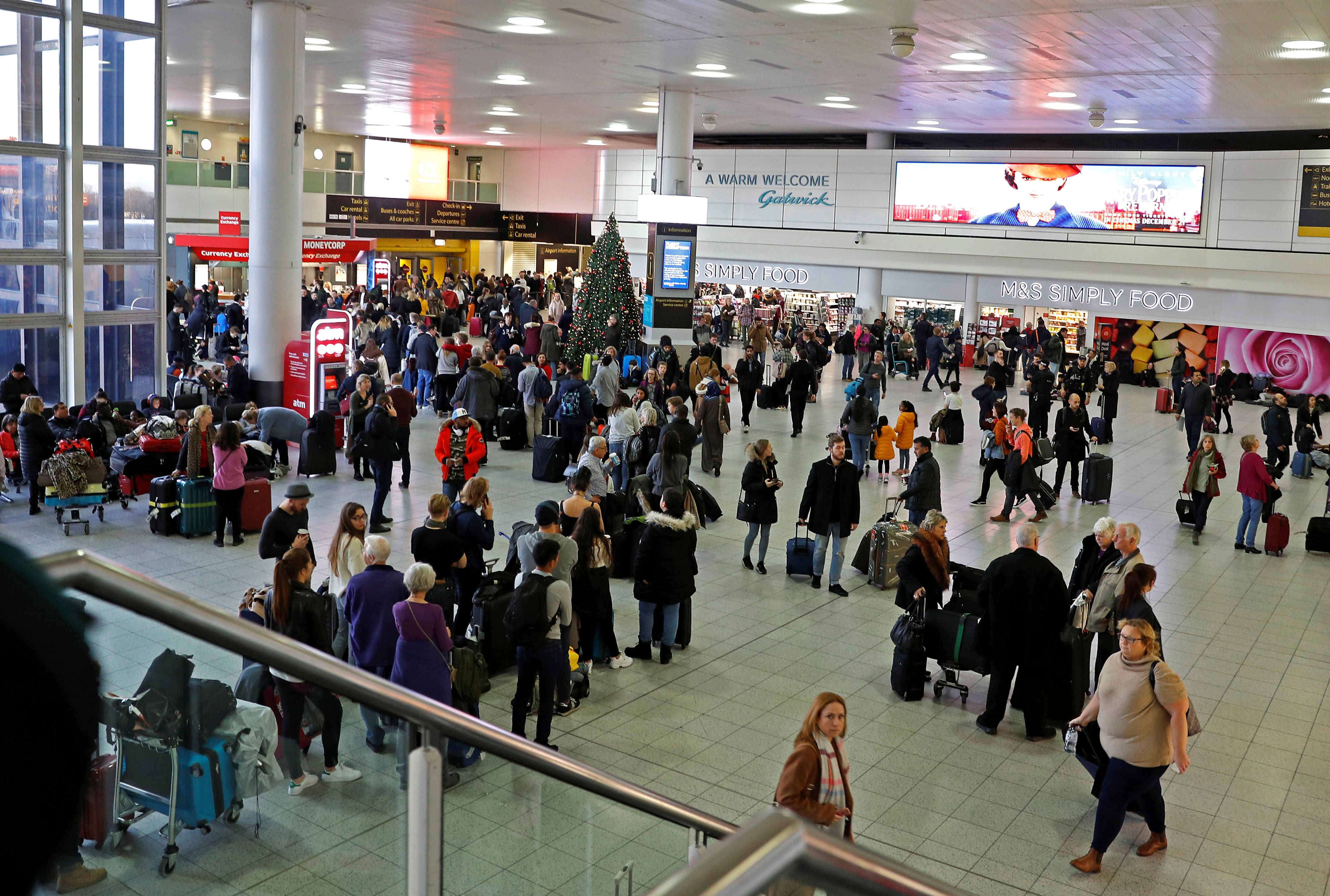 LONDON (Reuters) – Government and security officials must “up their game” to tackle the illegal use of drones at airports which brought chaos to London’s Gatwick airport in the run-up to Christmas, Britain’s most senior police officer said on Thursday.

Three days of drone sightings at Britain’s second busiest airport lead to about 1,000 flight cancellations and disrupted the travel of 140,000 passengers in what is thought to be the most disruptive incident of its kind.

London’s Metropolitan Police Commissioner Cressida Dick said no police force around the world could be sure of preventing the problem posed by drones at airports.

“I think the whole country and certainly the government will have watched what’s gone on and said we need to up our game here,” Dick told BBC radio.

“You won’t find a police service in the world I think who would be sitting complacently thinking: ‘well we could always deal with a drone’.”

The drones were first spotted at Gatwick on Dec. 19. Every time the airport sought to reopen the runway, the drones returned and authorities only regained control over the airfield after the army deployed military technology to guard the area.

Security Minister Ben Wallace said on Monday that Britain’s security forces now had detection systems that could be deployed across the country to combat the drone threat.

“The drone technology is always changing. We have to keep up with that. There are a whole variety of tactics and technologies that we are now using, can use and in the future they will have to change again I’m sure,” said Dick.

“I’ve been talking to colleagues around the world. I can tell you this is not an easy problem. We are doing our very best here and going into the future I’m sure working closely with others we will get better and better.”

The police investigation into the Gatwick incident is ongoing. Detectives on Sunday released without charge two people they had suspected of flying the drones.

Flying drones within 1 km (0.6 mile) of a British airport boundary is punishable by up to five years in prison. 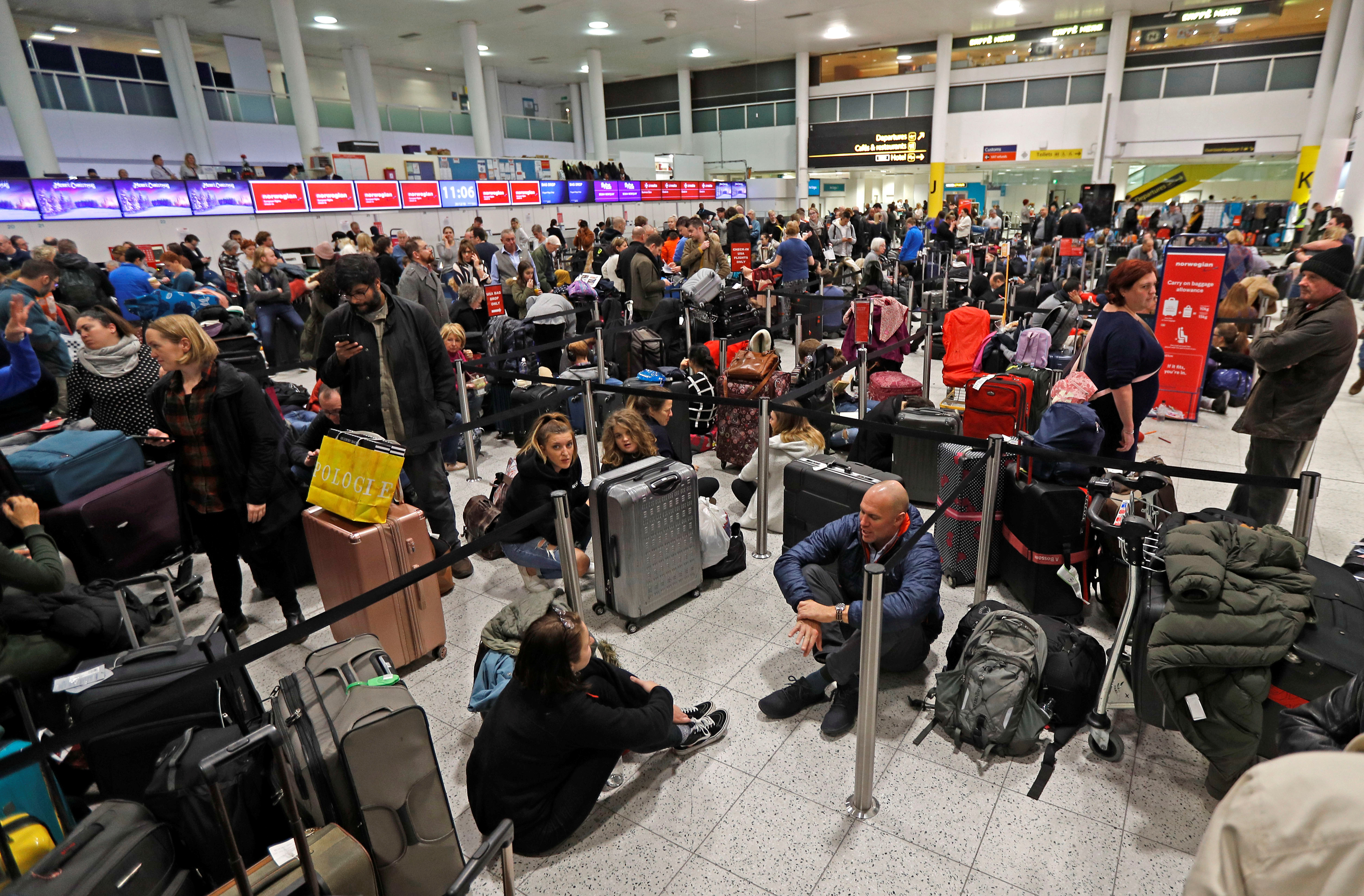 LONDON (Reuters) – A mystery drone operator’s success in shutting down Britain’s second busiest airport for more than 36 hours has exposed the vulnerability of others across the world to saboteurs armed with such cheap and easily available devices.

The incursion at London Gatwick, a brazen game of cat and mouse that those responsible played with Europe’s top military power, underlined how many airports lack the means to catch drone pilots quickly, let alone destroy the unmanned aerial vehicles themselves.

Advances in technology mean drones can be controlled from far away using cameras on board, or even programmed to navigate their own way to targets, and back again.

“There is no silver bullet technology,” said Geoff Moore, business development manager at UK-based Blighter Surveillance Systems, which supplies the U.S. military with anti-drone technology he said was used in Afghanistan, Syria, and Iraq.

“Drone technology is evolving quickly, the levels of autonomy are increasing, the ease of flight is increasing to the point where they can be almost ‘fire and forget’ one-button launchable.”

The nightmare at Gatwick, which stranded more than 100,000 people when all flights were grounded, was finally brought under control on Friday after the government ordered the army to use military equipment to protect the site.

Moore said radar systems used by air traffic control were designed to spot commercial aircraft rather than something as small and as close to the ground as a drone. To detect them, airports need specialist radar reinforced by thermal imaging technology. “There are no specific regulations or guidelines on UK airports that mandate that they have to deploy drone detection systems,” he said.

After detecting the drone, it needs to be disabled by interfering with its navigation system or by simply shooting it down. Authorities at Gatwick were reluctant to use guns because of the danger posed by stray bullets at a crowded airport.

And it is not enough to jam some radio frequencies because modern drones were not always radio-controlled like old-fashioned model aircraft.

Richard Gill, founder and chief executive of Drone Defence, said the fact that the drones at Gatwick were not disabled more quickly indicates that they were not relying on a radio link.

Gill said the technology that allowed a drone to be pre-programmed so that it navigates to a point or a number of points and then returns to base to recharge, could be bought from online.

“A motivated individual could potentially carry out this act,” he said. “But it is very sophisticated, it is pre-planned, it is very deliberate what they have done to cause the maximum disruption at a really busy airport in the UK.”

Jamming tactics can be risky in an airport where there are other critical communications systems.

Defense systems cannot simply block radio frequencies used to control drones, or GPS signals that the devices use to navigate, because of regulations, Moore said.

“The problem with the UK is there are some regulatory requirements around the use of things like radio frequency jamming – it’s illegal to do that,” he said. “There’s not so many mitigation technologies available in the UK because mostly they are restricted or unavailable.”

ADS, a trade group representing the aerospace, defense and security sectors, said it had asked the government to strengthen police powers, as well as the ability of airport operators and others to deploy electronic counter-measures.

But at Gatwick, the perpetrators were still at large on Friday after the most advanced drone attack yet on a major airport. 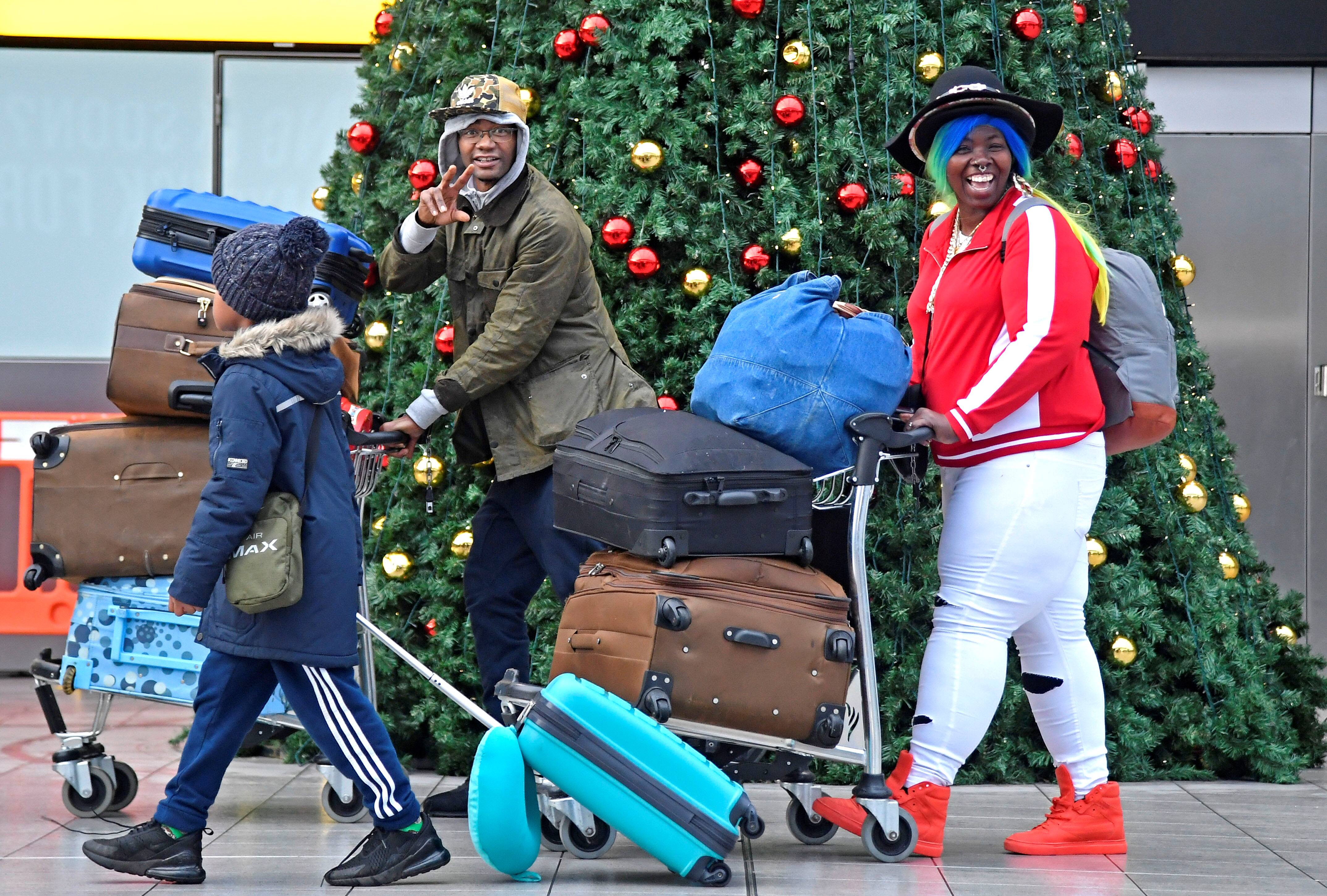 GATWICK, England (Reuters) – London’s Gatwick Airport reopened on Friday after a mystery saboteur wrought 36 hours of travel chaos for more than 100,000 Christmas travelers by using drones to play cat-and-mouse with police snipers and the army.

After the biggest disruption at Gatwick, Britain’s second busiest airport, since a volcanic ash cloud in 2010, Gatwick said around 700 planes were due to take off on Friday, although there would still be delays and cancellations.

Britain deployed unidentified military technology to guard the airport against what Transport Secretary Chris Grayling said were thought to be several drones.

“I think passengers are safe,” Grayling said. “This kind of incident is unprecedented anywhere in the world.”

The motivation of the drone operator, or operators, was unclear. Police said there was nothing to suggest the crippling of one of Europe’s busiest airports was a terrorist attack.

Gatwick’s drone nightmare is thought to be the most disruptive yet at a major airport and indicates a new vulnerability that will be scrutinized by security forces and airport operators across the world.

The army and police snipers were called in to hunt down the drones, thought to be industrial style craft, which flew near the airport every time it tried to reopen on Thursday. The last time a drone was spotted at the airport was at 2200 GMT on Thursday.

The perpetrator has not yet been detained but the police said they had a number of possible suspects. No group has claimed responsibility publicly and police said there was no evidence another state was involved.

Sussex Police Assistant Chief Constable Steve Barry said they were keeping an open mind about who was responsible.

“In terms of the motivation, there’s a whole spectrum of possibilities, from the really high-end criminal behavior that we’ve seen, all the way down to potentially, just individuals trying to be malicious, trying to disrupt the airport,” he said.

After a boom in drone sales, unmanned aerial vehicles have become a growing menace at airports across the world.

In Britain, the number of near misses between private drones and aircraft more than tripled between 2015 and 2017, with 92 incidents recorded last year. 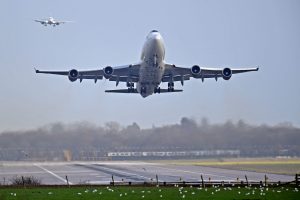 An airplane takes off at Gatwick Airport, after the airport reopened to flights following its forced closure because of drone activity, in Gatwick, Britain, December 21, 2018. REUTERS/Toby Melville

The British Airline Pilots’ Association (BALPA) said it understood “detection and tracking equipment” had been installed around Gatwick’s perimeter.

BALPA said that it was extremely concerned at the risk of a drone collision. Flying drones within 1 km (0.6 mile) of a British airport boundary is punishable by five years in prison.

The defense ministry refused to comment on what technology was deployed but drone experts said airports needed to deploy specialist radar reinforced by thermal imaging technology to detect such unmanned flying vehicles.

Other ways to tackle them is typically by frequency jamming that can disable or disrupt control signals and the GPS signals that allow the drones to navigate.

The drone sightings caused misery for travelers, many sleeping on the airport floor as they searched for alternative routes to holidays and Christmas family gatherings.

Flights were halted at 2103 GMT on Wednesday after two drones were spotted near the airfield. The disruption affected at least 120,000 people on Wednesday and Thursday, with thousands more to be disrupted on Friday.

It was not immediately clear what the financial impact would be on the main airlines operating from Gatwick including EasyJet, British Airways and Norwegian.

Britain’s Civil Aviation Authority said it considered the event to be an “extraordinary circumstance” meaning airlines are not obliged to pay compensation to affected passengers.

Airlines will have to refund customers who no longer wish to travel however and try to reschedule flights to get passengers to their destinations. 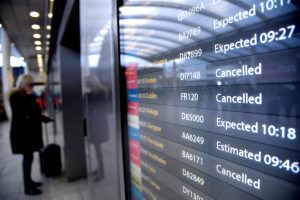 An arrivals board in the South Terminal building at Gatwick Airport, after the airport reopened to flights following its forced closure because of drone activity, in Gatwick, Britain, December 21, 2018. REUTERS/Toby Melville

A Reuters witness at Gatwick’s South Terminal said the airport was busy, with many people waiting with luggage and queues for service desks, but not unusually so for such a day.

Some airport staff handed out chocolate and Christmas elf toys to stranded passengers.

Some, like Sarah Garghan-Watson, chose to stick it out at the airport overnight, having arrived at 8 a.m. on Thursday.

“It’s now 2 o’clock in the morning at Gatwick, and it’s very bright and very noisy. It’s now also very cold,” she said in a video shown on Sky.

“All I can see tonight … is a sign that says ‘no more sleeps until the beach’. And here we are, sleeping, in the stairs at Gatwick, because there’s no flights.”