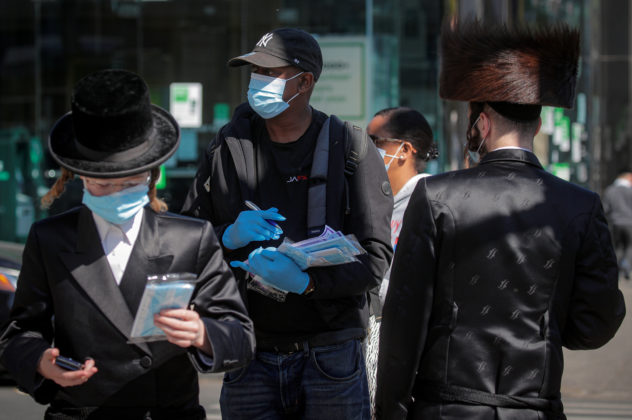 Both actions argue that the state’s restrictions on religious gatherings violate the U.S. Constitution’s First Amendment right to freedom of religion.

Cuomo issued an order on Oct. 6 that shut down non-essential businesses and restricted gatherings at religious institutions to as few as 10 people in certain targeted areas, including some Brooklyn neighborhoods, where infections have spiked.

Cuomo insisted that his infection-fighting measures were not intended to single out religious groups and were consistent with other steps he has taken to combat geographic “clusters,” which he has defined as “red zones,” where infections spread rapidly.

But he also blamed the Orthodox Jewish communities for causing some of the infection spread in their areas.

“They never complied with any of the close-down rules going back to March,” he said in a briefing on Thursday. “That’s why some find it shocking, because they didn’t follow many of the rules all along.”

In their complaint which is laced with historical references to persecution, the Orthodox congregations said Cuomo has outlawed “all but the most minimal communal religious worship.”

“For Jews, communal worship is an essential service for which untold thousands have risked and sacrificed their lives,” the congregations — Ohalei Shem D’Nitra, Yesheos Yakov and Netzach Yisroel — said in a 33-page complaint.

Brooklyn’s Roman Catholic diocese, meanwhile, was rebuffed on Friday in its request for a temporary court order to bar the restrictions from taking effect.

But the diocese said its case was still alive, with U.S. District Court Judge Nicholas Garaufis having set a hearing for 2 p.m. EDT (1800 GMT) Thursday for arguments on its request for a longer-lasting preliminary injunction against the restrictions in 28 areas of Brooklyn and Queens.

In its complaint the diocese said it has complied with the state’s restrictions since the pandemic erupted in March, and that the new targeted measures are overly broad, infringing not only on worship services but also on ceremonies such as weddings and funerals.

“By causing the cancellation or severe curtailment of such services, the order would impose irreparable harm on the Diocese of Brooklyn and those it serves,” said the 22-page complaint.

The state’s targeted measures have sparked protests and occasional violence in some predominantly Hasidic Jewish areas of Brooklyn’s Borough Park neighborhood. In that area, more than 8% of coronavirus tests came back positive last week.