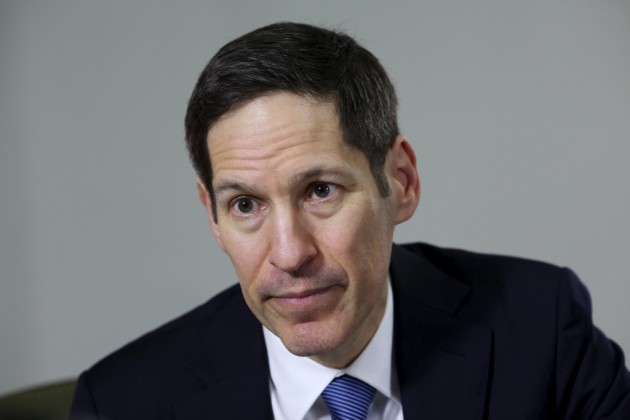 Thomas Frieden, director of U.S. Centers for Disease Control and Prevention, listens during an interview with Reuters at the Puerto Rico Health Department in San Juan on March 8, 2016. REUTERS / Alvin Baez

SAN JUAN, PUERTO RICO (Reuters) – During a tour of Zika preparations in Puerto Rico, Dr. Thomas Frieden, director of the U.S. Centers for Disease Control and Prevention, called Zika a “tremendous challenge and crisis” and said protecting pregnant women from the virus is a top priority.

In Brazil, Zika has been linked to a spike in cases of microcephaly, a birth defect marked by small head size and underdeveloped brains.

“Until a few months ago, no one had any idea that Zika could cause birth defects,” Frieden told reporters Tuesday at a briefing in Puerto Rico’s health department.

Frieden has been working with CDC staff and the Puerto Rican government on strategies to protect pregnant from becoming infected with the mosquito-borne virus, which Frieden called a top priority.

In Puerto Rico, the Aedes aegypti mosquito that carries Zika is widespread, and Frieden said controlling it will require a multi-pronged approach involving government, municipalities, neighbors, families and society at large.

Cases of Zika are doubling weekly in Puerto Rico, and the CDC expects hundreds of thousands of individuals will become infected, including thousands of pregnant women.

He also suggested adding window screens and air conditioning, where possible. And he called for reducing standing water in and around homes to eliminate mosquito breeding habitats.

Frieden’s comments, delivered mostly in Spanish, followed two days of briefings with staff at the CDC’s Emergency Operations Center in San Juan. CDC researchers are monitoring the outbreak and studying the best ways to prevent Zika infections through education campaigns, and the distribution of Zika prevention kits for pregnant women.

At the CDC’s Dengue Branch in Puerto Rico, scientists are conducting research on the most effective mosquito control measures, and processing diagnostic tests from blood samples delivered daily to the laboratory.

Dr. Jorge Munoz, branch director, said in an interview they are capable of processing 400 to 500 blood samples a week. Scientists at the laboratory developed a triple test that can detect Zika, dengue and chikungunya – three different viruses carried by the Aedes aegypti mosquito that is endemic in Puerto Rico.

The test will be crucial in helping to quickly sort out whether Zika was the cause of an infection or whether it was dengue and chikungunya, which also cause infection and illness.

“Puerto Rico is in a very different situation from the rest of the United States,” Frieden told the briefing.

Besides the high density of Aedes aegypti mosquitoes, Puerto Rico has a lot of housing without window screens or air conditioning.

“The combination of those two things, when you add Zika in, means the likelihood of a very large number of cases,” Frieden said.

“In rest of the United States, we may see clusters,” he said. But if Zika behaves the way chikungunya and dengue have, “we will not see widespread transmission.”