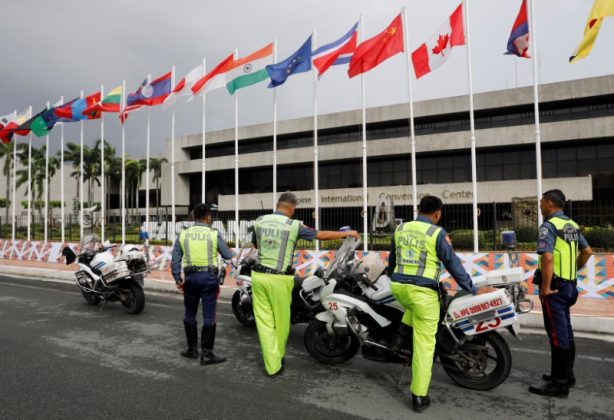 MANILA (Reuters) – Southeast Asian ministers meeting this week are set to avoid tackling the subject of Beijing’s arming and building of manmade South China Sea islands, preparing to endorse a framework for a code of conduct that is neither binding nor enforceable.

The Association of South East Asian Nations (ASEAN) has omitted references to China’s most controversial activities in its joint communique, a draft reviewed by Reuters shows.

In addition, a leaked blueprint for establishing an ASEAN-China code of maritime conduct does not call for it to be legally binding, or seek adherence to the United Nations Convention on the Law of the Sea (UNCLOS).

The two drafts highlight China’s growing regional clout at a time of uncertainty whether the new U.S. administration will try to check Beijing’s assertiveness in the disputed waters.

The South China Sea chapter in the latest draft communique, a negotiated text subject to changes, is a watered-down version of one issued in Laos last year.

ASEAN expressed “serious concern” in that text, and “emphasised the importance of non-militarisation and self-restraint in all activities, including land reclamation.”

But the latest text calls for avoidance of “unilateral actions in disputed features” instead.

The role of the Philippines as 2017 chair of ASEAN has helped China keep a lid on discord.

Once ASEAN’s most vocal critic of China’s conduct, the Philippines, under President Rodrigo Duterte, has put aside disputes in exchange for Chinese funding pledges of $24 billion.

ASEAN ties with the United States, under President Donald Trump, have been in flux, as questions linger over Washington’s commitment to maritime security and trade in Asia, diminishing the grouping’s bargaining power with Beijing.

A legally binding and enforceable code of conduct has been a goal for ASEAN’s claimant members – Brunei, Malaysia, the Philippines and Vietnam – since a 2002 pact to ensure freedom of navigation and overflight and leave rocks and reefs uninhabited.

That pact, the Declaration of Conduct (DOC) of Parties in the South China Sea, has been largely ignored, particularly by China, which reclaimed seven reefs and can now deploy combat planes on three, besides defense systems already in place.

Analysts and some ASEAN diplomats worry that China’s sudden support for negotiating a code of conduct is a ploy to buy time to further boost its military capability.

“We could have done more to push China to agree to a much stronger document, holding claimant states more accountable,” said one ASEAN diplomat.

The agreed two-page framework is broad and leaves wide scope for disagreement, urging a commitment to the “purposes and principles” of UNCLOS, for example, rather than adherence.

The framework papers over the big differences between ASEAN nations and China, said Patrick Cronin of the Center for a New American Security.

“Optimists will see this non-binding agreement as a small step forward, allowing habits of cooperation to develop, despite differences,” he said.

“Pessimists will see this as a gambit favorable to a China determined to make the majority of the South China Sea its domestic lake.”

Diplomats say ASEAN’s requirement of consensus in decision-making allows China to pressure some members to disagree with proposals it dislikes. China has long denied interfering.

A separate ASEAN document, dated May and seen by Reuters, shows that Vietnam pushed for stronger, more specific text.

Vietnam sought mention of respect for “sovereignty, sovereign rights and jurisdiction” not only in accordance with international law, but more specifically, UNCLOS.

Experts say the uncertain future U.S. commitment to Asia leaves Vietnam in the most exposed position, as it has competing claims with China and relies on imports from its neighbor.

Opposition by China has repeatedly disrupted Vietnam’s efforts to exploit offshore energy reserves, most recently in an area overlapping what Beijing considers its oil concessions.

The code of conduct framework was useful to build confidence, said Philippine security expert Rommel Banlaoi, but was not enough to manage and prevent conflict in the South China Sea.

China claims almost the entire South China Sea, through which about $5 trillion in goods pass every year. Brunei, Malaysia, the Philippines, Taiwan and Vietnam also have claims.