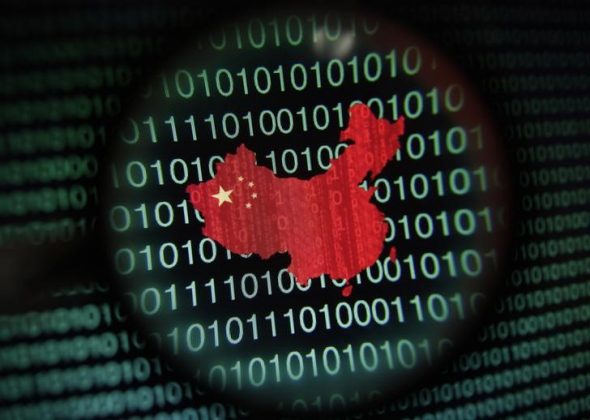 A map of China is seen through a magnifying glass on a computer screen showing binary digits in Singapore in this January 2, 2014 photo illustration. REUTERS/Edgar Su

BEIJING (Reuters) – The strengthening of cyber capabilities is an important part of China’s military modernization, the government said on Wednesday, warning that the internet should not become “a new battlefield”.

China, home to the largest number of internet users, has long called for greater cooperation among countries in developing and governing the internet, while reiterating the need to respect “cyber sovereignty”.

But Beijing, which operates the world’s most sophisticated online censorship mechanism known elsewhere as the “Great Firewall”, has also signaled that it wants to rectify “imbalances” in the way standards across cyberspace are set.

“The building of national defense cyberspace capabilities is an important part of China’s military modernization,” the Foreign Ministry and the Cyberspace Administration of China, the country’s internet regulator, said in a strategy paper on the ministry’s website.

China will help the military in its important role of “safeguarding national cyberspace sovereignty, security and development interests” and “hasten the building of cyberspace capabilities”, they said, but also called on countries to “guard against cyberspace becoming a new battlefield”.

“Enhancing deterrence, pursing absolute security and engaging in a (cyber) arms race – this is a road to nowhere,” Long Zhao, the Foreign Ministry’s coordinator of cyberspace affairs, said at a briefing on the strategy.

“China is deeply worried by the increase of cyber attacks around the world,” Long said.

The United States has accused China’s government and military of cyber attacks on U.S. government computer systems. China denies the accusations and says it is a victim of hacking.

A cyber attack from China crashed the website of South Korea’s Lotte Duty Free on Thursday, a company official said, at a time when South Korean firms are reporting difficulties in China following the deployment of a U.S. missile defense system in South Korea that China objects to.

While China’s influence in global technology has grown, its ruling Communist Party led by President Xi Jinping has presided over broader and more vigorous efforts to control and censor the flow of information online.

Chinese officials say the country’s internet is thriving and controls are needed for security and stability.