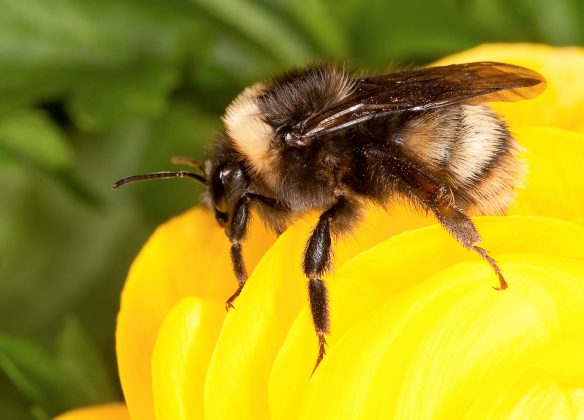 The western bumble bee, Bombus occidentalis, is seen in this undated U.S. Department of Agriculture photo. REUTERS/Stephen Ausmus/USDA/Handout via Reuters

(Reuters) – More than 700 of the 4,000 native bee species in North America and Hawaii are believed to be inching toward extinction due to increased pesticide use leading to habitat loss, a scientific study showed on Wednesday.

The Center for Biological Diversity’s report concluded that of the 1,437 native bee species for which there was sufficient data to evaluate, about 749 of them were declining. Some 347 of the species, which play a vital role in plant pollination, are imperiled and at risk of extinction, the study found.

“It’s a quiet but staggering crisis unfolding right under our noses that illuminates the unacceptably high cost of our careless addiction to pesticides and monoculture farming,” its author, Kelsey Kopec, said in a statement.

Habitat loss, along with heavy pesticide use, climate change and increasing urbanization are the main causes for declining bee populations, the study found.

Experts from the center reviewed the status of 316 bee species and then conducted reviews of all available information to determine the status of a further 1,121 species. The center said the species which lacked sufficient data were also presumed to be at risk of extinction.

Among the native species that are severely threatened are the Gulf Coast solitary bee, the macropis cuckoo bee and the sunflower leafcutting bee, which is now rarely seen.

Last month, the rusty patched bumble bee was listed by federal authorities as endangered, becoming the first wild bee in the continental United States to gain such protection.

Bees provide valuable services: the pollination furnished by various insects in the United States, mostly by bees, has been valued at an estimated $3 billion each year.

The center’s Kopec noted that almost 90 percent of wild plants are dependent on insect pollination.

“If we don’t act to save these remarkable creatures, our world will be a less colorful and more lonesome place,” she said.