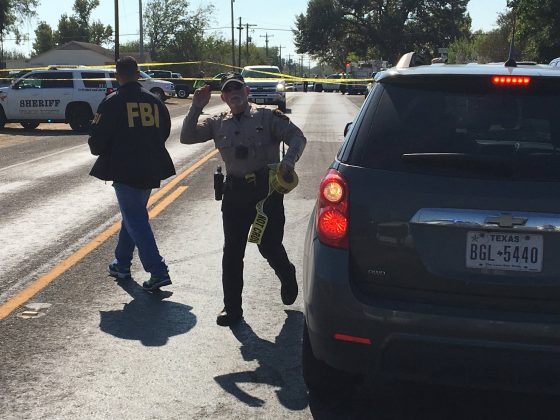 FBI officials arrive at the site of a mass shooting in Sutherland Springs, Texas, U.S., November 5, 2017, in this picture obtained via social media. MAX MASSEY/ KSAT 12/via REUTERS

On this quiet Autumn morning in Sutherland Springs, Texas, worshipers at the First Baptist Church,  whose members spanned generations, were gathered together for their Sunday morning worship service. This is the kind of church that many were raised in and then brought up their own children, the kind of church where everyone was family.  At approximately, 11:30 am  a young man in his twenties burst through the doors and immediately began firing indiscriminately.  After pausing to reload, the gunman continued to spray the church hitting men, women and children as they frantically tried to escape.  The evil continued leaving 26 dead and at least 20 wounded.  The victims ranging in age from 5 to 72.  Because of the seriousness of  the injuries, the sheriff’s office has said that the death toll could rise.   Some of the church members did escape although that amount has not yet been released. Witnesses are currently being questioned.

Police were notified by a phone call when the suspect had exited his vehicle at a gas station close to the church wearing all black tactical clothing gear and a ballistic vest.  The suspect began shooting at the church before entering and continued to fire.  Bullets flew as he exited the building where a neighbor engaged in gunfire with the shooter.  A car chase ensued,  ending in a crash where the death of the suspect was confirmed.  It is not known if the shooter committed suicide or was injured by the shoot out in front of the church.

The name of the suspect has not yet been released while federal, state and local authorities sift through the crime scenes.

The devastated community of Sutherland Springs located 40 miles Southeast of San Antonio  with a little more than 800 residents and surrounding small Texas towns, rushed to gather at the community center just down the street from this horrible attack.  These people are neighbors, family, friends and coworkers.  Other area churches emptied and prayer vigils began in an attempt to give some peace and comfort for those suffering from the shock and pain of this tragedy.  Answers have come slowly and has been agony for those waiting.

More information will be released after next of kin of those killed have been informed and allow family members to arrange to travel to San Antonio  to those that are injured.  The Texas police, Governor Abbott and the Federal authorities ask that the media respect all of those involved while they continue to search for answers.