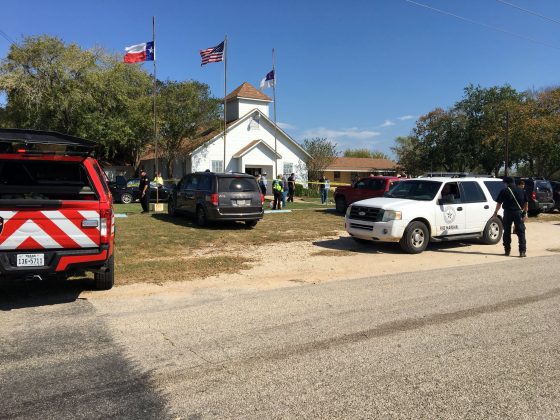 The area around a site of a mass shooting is taped out in Sutherland Springs, Texas, U.S., November 5, 2017, in this picture obtained via social media. MAX MASSEY/ KSAT 12/via REUTERS

At the present time, officials are reporting over 20 people are dead including children with multiple injuries. Our prayers are with this Texas community as well as families of this victims. We will be updating as this story develops.

(Reuters) – A gunman entered a church in a small town in southeast Texas on Sunday and began firing, resulting in “multiple” fatalities and injuries, local media reported, citing the county authorities.

The gunman was killed after fleeing in a vehicle from the First Baptist Church in Sutherland Springs, about 40 miles (65 km) east of San Antonio, local media said, citing police.

Sheriff Joe Tackitt told the Wilson County News that there have been multiple injuries and fatalities, including children. It was not clear how many people have been killed or wounded.

The Wilson County Texas Sheriff’s Office declined to provide Reuters with further details on the shooting.

About 860 people live in the Sutherland Springs area in 2010, according to the U.S. Census.

Agents of the Federal Bureau of Investigation, the U.S. Bureau of Alcohol, Tobacco, Firearms and Explosives and other law enforcement agencies were either on the scene or traveling there.

President Donald Trump said he was monitoring the situation while in Japan on a 12-day Asian trip.

“May God be w/ the people of Sutherland Springs, Texas. The FBI & law enforcement are on the scene,” he said on Twitter.

In October, a gunman killed 58 people at a concert in Las Vegas, the deadliest mass shooting in modern U.S. history